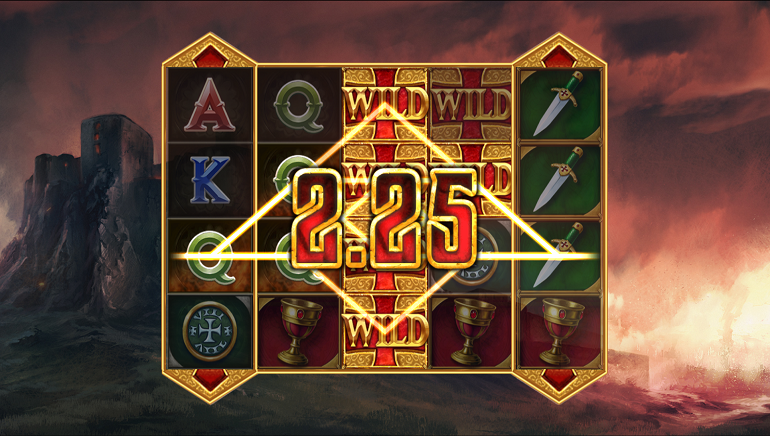 Travel back to 1291 and see whether the Crusader forces will fall under the threat of the Mamluk horde in this historic slot from ELK Studios.

From the 11th to 17th century, there was a sporadic series of religious wars known as the Crusades, fought from Europe to Asia. In Crusader, the year is 1291 and a Crusader fortress in the city of Acre is at risk from falling to the Mamluks. The entire premise of the slot is built upon whether the Crusaders will stand or fall.

ELK Studios is responsible for development and has produced the Crusader slot with an interface built from five reels and four rows. A total of 26 paylines have been built into the mobile-compatible slot. As for wagering, the total bet can vary from the low of €0.20 up to the high of €100.00. The value of the bet will alter the potential winnings displayed in the paytable.

While playing, users will have the option of assigning pre-developed wagering strategies. Optimiser can increase by a selected percentage, Leveller increases by two levels after five losses, Booster increases by one level after a loss, and Jumper rises one level following a win. Of course, Crusader will also allow for users to select a wagering value and then assign a number of auto-spins from the options of 10, 25, 50, or 100.

Crusader can be played with the chance of winning up to €250,00. Wilds can assist by substituting for any missing symbols aside from Expansions. Even more important are Crusader Wilds because of their ability to fill a full reel. They can even be nudged onto the reels if they make a partial appearance.

Two full Crusader Wilds will appear to fill the first and fifth reels entirely and also trigger free spins. They can fill even more positions if an Expansion symbol arrives. This will result in a major transformation that will see the reels increase from four rows to 12. Another free spin will be unlocked as part of the process.