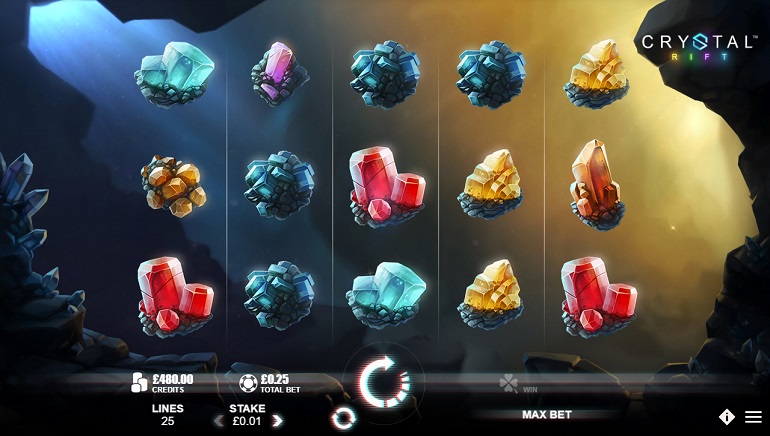 Crystal Rift is a slot with an unmistakable charm and a sleek design, developed by Rabcat for Microgaming casinos.

Rabcat is a software developer that has released dozens of popular slots over the years and their recent creation is a game developed exclusively for Microgaming casinos. Crystal Rift is a great looking slot that instinctively appeals to players with its cool graphics, and there is much more than meets the eye about this game. Players are invited to embark on a quest that will take them deep inside a cavern where untold riches are hidden. There is also danger lurking in this mysterious cave, but the high return on investment provides players with the ultimate incentive to take their chances.

Behind the breathtaking visuals and sound effects that leave a long-lasting impression upon players, lies a game with a solid gameplay. Crystal Rift is a slot with 25 pay lines and a 5×3 matrix, which combines Wild Grids with Bonus Falls that make the hunt for treasures even more exciting. Those who like surprises in general and pleasant surprises in particular will appreciate the unpredictability of these features. There are a total of 20 different grid patterns, split into four categories, which go by the name of basic, super, mega and insane.

Triggering three back-to-back winnings will turn regular symbols into wilds, which in turn, can substitute any other sign on the reels to create more winning combinations. Crystal Rift has cascading reels that come to life and light up the active pay lines, while players are awarded high paying crystals. Rabcat has set the bar high with its latest releases and the new slot can be played at Microgaming casinos since Wednesday, November 21. Players can enjoy the game on desktop and laptop computers, as well as mobile devices powered by iOS, Android and Windows operating companies systems.