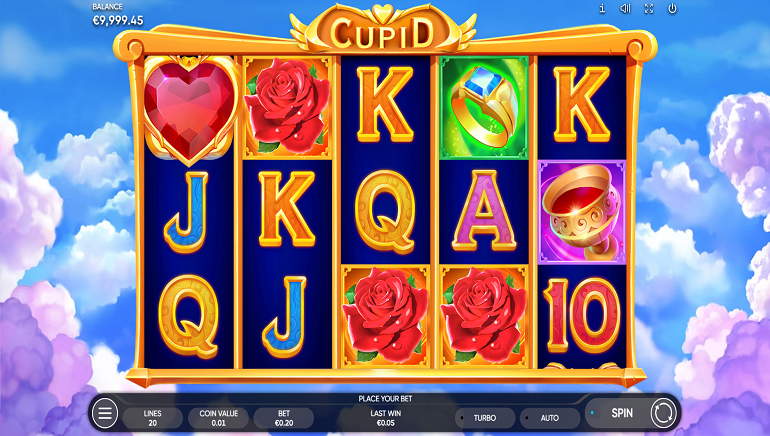 Cupid is a new romance-themed online slot from Endorphina, Cupids' arrow strikes during a free games round where hearts pay win multipliers.

The Cupid slot from Endorphina celebrates love and romance across 5 reels and 20 paylines. It's a colourful desktop and mobile game where the Roman god of love appears alongside red roses, a white dove, and love hearts. It's launched just in time for Valentines Day.

Feel The Love For The Cupid Slots Game

A 5x2 grid of symbols sits within a gold frame against a backdrop of blue skies and fluffy white clouds. Playing card symbols return smaller prizes when they appear across any of the 20 lines, while themed images pay out the bigger wins.

Cupid himself is firing an arrow and is on target to pay the biggest prize of 450x the stake when he lands right across a line. He's also a wild symbol who can step in for all others, apart from the red love heart to complete wins. If more than 1 wild symbol is part of a win, the base prize is doubled in value.

The ruby-red heart in 3 or more places will award 20 free spins. During this round, 8 different-coloured heart symbols appear, each split in 2. If players land the 2 halves of the same heart next to each other, they collect a win multiplier. The pale pink heart pays the least, at just 1x the stake, but the multicoloured heart symbols are worth 200x the bet, and the red heart pays out a heart-warming 500x.

Players can gamble wins in an optional feature where the aim is to beat a Dealers face-up playing card by selecting a higher value card from 4 options. Successful picks double the win, and players can keep going for up to 10 rounds.

Cupid is a PC and mobile game that has an average return to players percentage of 96&. It's now available to play for between 0.20 and 200.00 per spin at the top Endorphina sites.