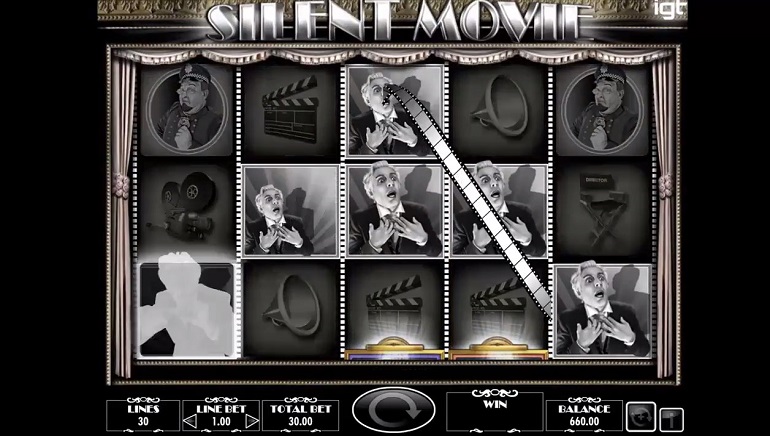 Casino games developer IGT have released a new video slot with a unique, nostalgic theme. Silent Movie has the look of an old film, and features images from the dawn of the industry.

Silent Movie is the latest release from games developer IGT, and is now available to play at online sites such as 888 Casino, Mr Green Casino and Bet Victor Casino. With images from a bygone era, the game comes complete with several bonus rounds including free spins, multiplier payouts and scatter wins.

IGT have gathered together a host of stars from the era, with symbols of cameras, clapperboards and bullhorns joined on the 5 reels and 30 paylines by the famous image of the Moon with a rocket in its' eye, the Keystone Kops, Dr Jekyll and a starlet. The high card symbols 10 through to A are all rendered in a 1920's style, helping to give this slot a distinctive, if somewhat monochromatic, appearance.

The Silent Movie logo is wild, substituting for other to complete winning lines, while cinema tickets trigger the various bonus rounds when they are paired with the relevant symbols.

A Host Of Extras

These rounds include the Trip To The Moon Bonus which treats players to extra wild symbols, and the Muddy Romance where the reels spin for free and extra scatter payouts can bring in bigger rewards. Players who trigger the Keystone Kops round will enjoy free spins with win multipliers of up to 10x the base amount, while the Dr Jekyll and Mr Hyde round sees guaranteed free spins that continue until 3 or 6 wins with a 3x multiplier have been achieved.

While some may not like the fact that this slot is based on films that few players may know about, or that the essentially black and white imagery may not be as vivid as other games, Silent Movie has been released by one of the oldest and most experienced games developers, so is sure to find an audience following it's launch on 9th June.