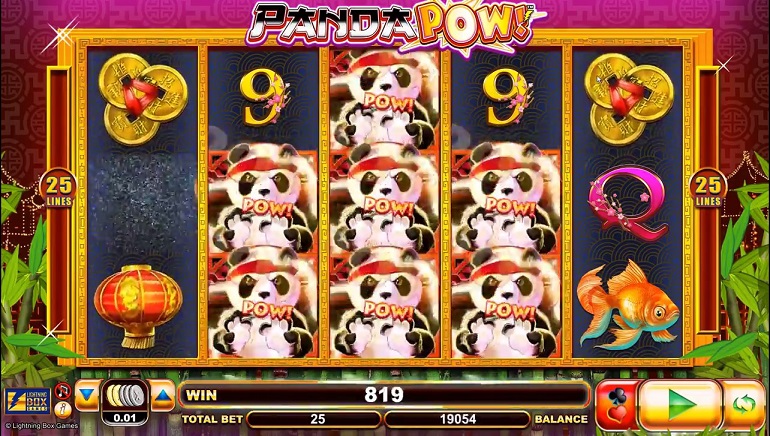 Panda Pow, the newest slot from Lightning Box Games, is a light-hearted, entertaining video slot that stars China’s favorite endangered species, the panda. And who doesn’t love pandas? Especially these pandas, who are not only cute but who also have the ability to grant lots of free spins and loads of fun.

Panda Pow is a 5-reel, 25-payline video slot with a Chinese theme and a reddish backdrop. Bets can range from 25p to £1,000 per spin, and the game can be found at Lightning Box-powered casinos.

There are two more panda symbols: the red panda, who sports a kung-fu headband and acts as the wild, and the gold panda, which only appears in the Free Games feature and also acts as the wild. While both pandas are wild, they cannot replace each other.

When five or more red kung fu pandas land on reels 1,2 or 3, the Free Games feature is triggered. In this round, players can win anywhere between 5 and 20 free spins. There are also stacked wilds in this feature, which can allow players to win up to 40 free spins.

Lightning Box Games is a slot design company that has been supplying slot games since 2004. The company was founded by mathematicians and their games are designed using sophisticated math models to offer the best in quality and graphics. Their partners include NYX, Amaya, Odobo, Incredible Technologies, Scientific Games, Inspired, Quickfire, Plaor, Game House, and Gigamedia.