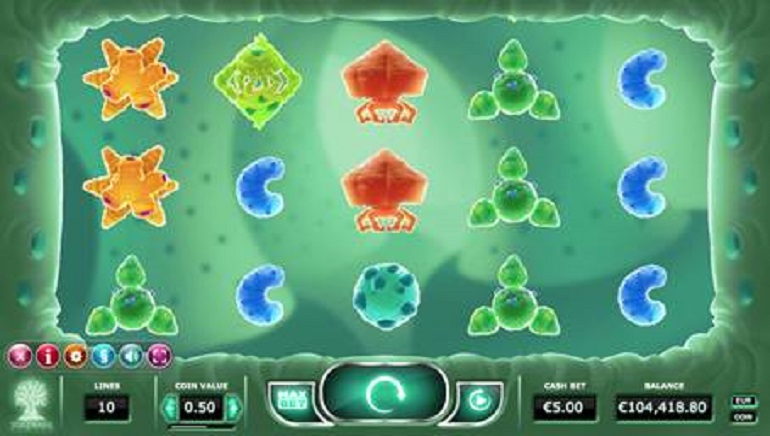 Cyrus the Virus is the latest colourful slot to be unleashed by Yggdrasil Gaming. Play it now from June 2015 at Yggdrasil casinos.

Yggdrasil Gaming has coincidentally launched its new Cyrus the Virus slot at a time when thousands of people in South Korea have been quarantined due to a MERS outbreak. Although the timing has proven less than ideal, Cyrus the Virus has been developed entirely from the perspective of fun and appears to be another great addition to Yggdrasil’s expanding games library.

From Monday 8 June 2015, online casinos with Yggdrasil slots will have access to Cyrus the Virus. The slot itself is set within a green organism populated by seven colourful virus symbols and a rather menacing-looking wild symbol. The wild can land only on the third reel, but will expand to cover all of the reel and trigger and re-spin.

Yggdrasil has built Cyrus the Virus with five reels and three rows, resulting in a slot interface with 15 symbols. Across the five reels, there are plenty of opportunities to win due to the 10 fixed paylines that can pay out in either direction. Meanwhile, the coin value can be set from at various levels from €0.01 up to €4.

Cyrus the Virus will provide another slot option for Super Free Spins, a feature that allows for Yggdrasil casinos to award infinite free spins to specified players. Vera & John was the first to unveil this feature that could soon appear at other Yggdrasil sites.

For widespread availability, Yggdrasil used its iSENSE 2.0 software to ensure that Cyrus the Virus could be released simultaneously on desktop and mobile devices. Company CEO Fredrik Elmqvist has explained that iSENSE 2.0 “has really helped operators streamline their marketing costs.”

Elmqvist has described Cyrus the Virus as “an extremely infectious slot with a perfect blend of rich graphics and immersive gameplay.” You can play it now at Yggdrasil Casinos.