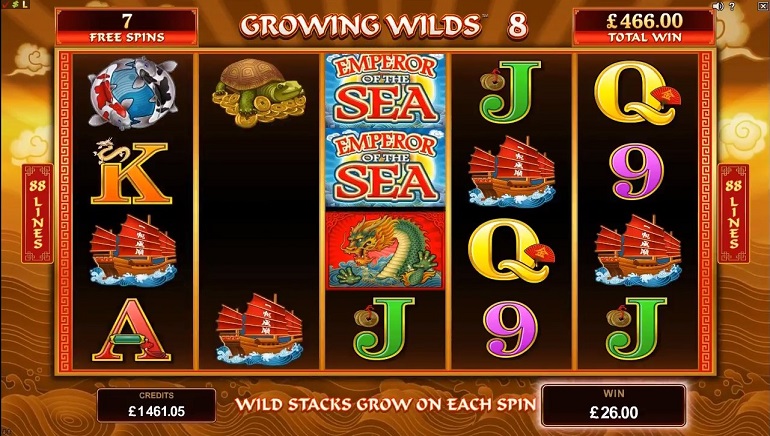 Microgaming have released an Asian-themed slot which features colourful symbols and some potentially rewarding bonus features.

Emperor of the Sea is a classic 5-reel slot game from the Microgaming company that follows the popular Chinese theme and has many of the traditional images that games of this nature often feature.

While the design may be conventional, there are some exciting bonus features, such as stacked wild wins and a free spins game where winning symbols can be replaced with new combinations and extra wilds.

Playing Emperor of the Sea

An unusual betting option allows players to play with 38, 68 or 88 paylines, with each of these numbers having a special significance in Asian culture. While the majority of the symbols are the classic playing card icons 9 through to A, there's plenty of unique picture symbols to add colour, interest and hopefully, higher payouts.

Players will see images of a boat, koi fish, turtle, jade bowl and an angry-looking dragon, but the real fun starts when the bonus symbols come into play.

The game logo is a wild symbol, helping to complete winning lines by substituting for all except the scatter, and the wild can also be stacked in all 4 positions on a reel, making its job much easier.

A golden bowl will carry out a couple of important duties, paying out multiples of the total wager when it stops in any 3 or more positions, while also triggering an exciting free spins game.

Free Spins With A Difference

Although the initial reward is just 8 free games, these can be extended thanks to Microgamings' Rolling Reels feature being in effect. Any symbols making up a winning line will disappear, leaving empty spaces for new symbols to drop down into. If this creates another winning combination the process repeats itself over and over, plus extra wilds will be added to the reels with each spin.

Each stack of wilds will grow and it's possible to get all 15 symbol positions filled with the wild symbol by the end of the bonus round, making all lines pay for 5 of a kind wilds.

Emperor of the Sea can now be found across the many online casinos that use Microgaming software, with brands like 7Sultans Casino, All Slots Casino and Jackpot City Casino.