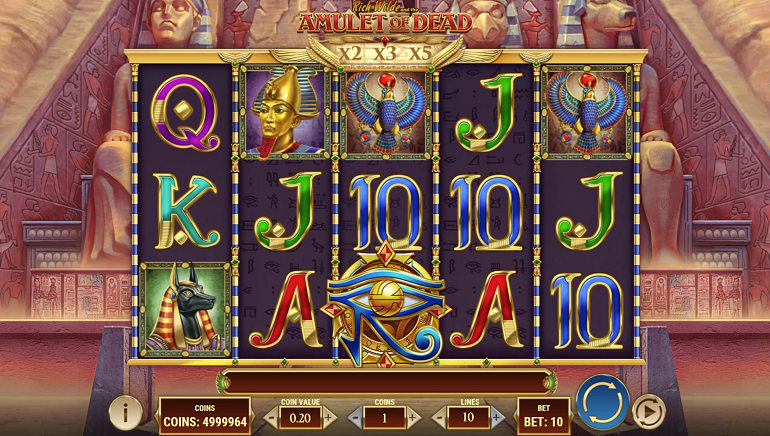 Rich Wilde and the Amulet of Dead is a 5-reel, 10-payline slot that’s playable on all devices. Bets range from $.01 to $100 per spin and the RTP is very good at 96.29%. Like other Rich Wilde games, this slot is highly volatile.

Rich Wilde and the Amulet of Dead is the latest installment in Play’n GO’s popular Rich Wilde series, and it has all the ingredients to become another hit. Set against the stunning Abu Simbel temples, the game is played on 5 reels and includes multipliers, 2 wilds, and a Free Spins round. It can be played online and on mobile at Play’n GO casinos.

Rich Wilde and the Amulet of Dead is a 5-reel, 10-payline slot that’s playable on all devices. Bets range from $.01 to $100 per spin and the RTP is very good at 96.29%. Like other Rich Wilde games, this slot is highly volatile. Wins are scored when at least 3 low-paying symbols and 2 high-paying symbols line up from the left.

Symbols include 10-A royals, Egyptian artifacts and gods, and Rich Wilde. The pendant symbol acts as both wild and scatter and pays out 100x the bet for 5 in a row. Scatter wins are multiplied by the total bet and added to payline wins. There is also a Thoth wild that can land stacked or single on the middle 3 reels. If 1, 2, or 3 Thoth wilds land, they activate a x2, x3, or x5 multiplier, which is applied to all wins on the triggering spin. Thoth wilds can land in the base game and in the Free Spins round.

When 3 or more scatters land, the Free Spins round is triggered. Players get 10 free spins and a random high-paying symbol is selected to be the expanding symbol for the duration of the entire round. After wins are calculated on each spin, the expanding symbol may expand to cover all three reel positions. If 3 or more scatters land during the Free Spins round, players get another 10 free spins.

This optional round gives players the chance to multiply the total prize on any spin in the main game by guessing the color or suit of a hidden card. Players can try the Gamble feature up to 5 times in a row.

Rich Wilde and the Amulet of Dead is another solid addition to Play’n GO’s popular series. While there is nothing incredibly new in this slot, Play’n GO has made all the features come together to create a game that’s thoroughly enjoyable. The main lack is that the maximum win is only 2500x the stake, a bit low for an adventure-filled, highly volatile game. However, there is still plenty to appreciate, including the gorgeous graphics, twangy soundtrack, and Free Spins.