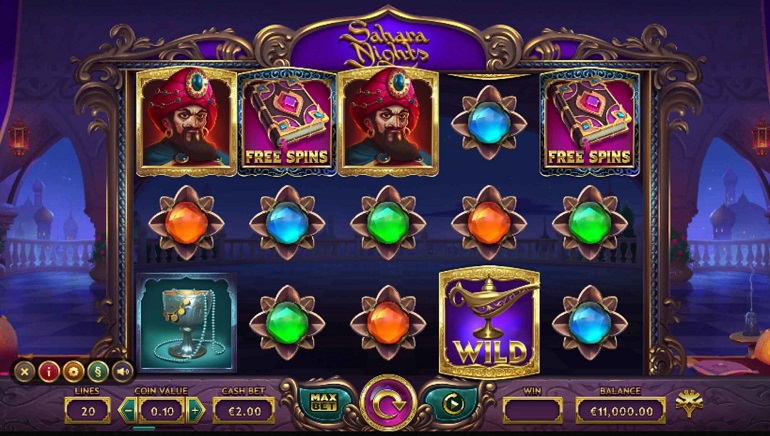 Players will embark on a magical journey through ancient Arabian lands when they play the Sahara Nights slot, which is new from Yggdrasil.

Deep in the desert, under starry skies, players will discover the new Sahara Nights slot from Yggdrasil Gaming. The high variance action unfolds within a palace where genies and gold lanterns conjure up some magical bonus features. Free games and expanding wilds are among the bonus features found in Saraha Nights.

The streets of this ancient city are filled with colourful jewel symbols, along with high-value goblets, daggers, a handsome hero and beautiful princess. A sultan is the most valuable symbol of all, paying out 165x the total stake when he fills an entire payline.

The five reels of the Sahara Nights slot are crossed by 20 paylines, and players can stake from just 0.20 on each spin. It's a high volatility game, where the long-term average return to players percentage is set at 96.2%.

A golden lamp is wild, able to act as others if needed. Players could see a blue genie rise up from the lamp, filling whole reels if he can then create a winning combination.

Three lamps and two storybook symbols appearing in the same spin transport players to a free spins bonus round. Up to 15 extra spins are awarded. Any lamps landing on the middle reels during the round will expand over reels, while extra bonus symbols will add further spins to the total.

Players will be able to access Sahara Nights on desktop and mobile platforms at casinos which use games from Yggdrasil.

Commenting on the game, Natalya Ovchinnikova, Product Owner Slots at Yggdrasil has said “For those who like high variance, Sahara Nights will not disappoint!''

She added that ''Five sultans pay x165 and getting 3 STICKY Wild Reels in free spins is not unheard of. With a richly appointed setting and immersive, high variance and engaging graphics, Sahara Nights is one of our most fun-filled, magical slots to date.”