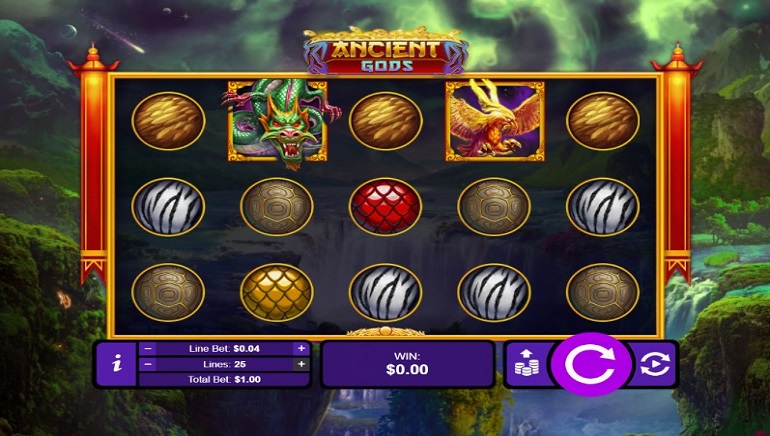 Ancient Gods is a slot from Realtime Gaming, where Chinese mythology comes to life and players can be awarded bonus games by magical dragons

Ancient Gods is a slot from Realtime Gaming that's inspired by Chinese myths and where magical Tigers, Snakes, Turtles and Dragons are found. Players will also discover bonus features such as wild substitutions and free spins where wins can be multiplied in value.

This 5-reel, 25-line game is set against a mountainous forest background, where dragons are darting in and out from the trees. Players collect winnings by landing matching symbols across a line, and the lower-value icons are the red Dragon scales, Tiger fur, Turtle shell and the golden scales of a Phoenix.

The creatures themselves create the high-paying combinations, becoming animated whenever they appear. A ferocious Centre Dragon is a wild symbol that can expand across whole reels, while a Golden Medallion is the scatter symbol, paying out high prizes and triggering a bonus feature when seen in any 3 or more places.

Players are given 2 free games for each Centre Dragon and Golden Medallion that appeared in the triggering spin. If 4 scatter symbols were seen, any prizes during the round are doubled, while 5 or more Medallions will see winnings tripled throughout the feature. On top of this, wilds will always expand across their reels, while scatters will transform into the Centre Dragon symbol.

It can lead to some impressive payouts, with up to 7,500x the line bet returned during the free games round. More Medallions can retrigger the free games feature.

A Game From The Gods

This slot is themed around a very popular topic of Chinese culture and comes with great style and some dramatic symbols. Ancient Gods is mobile optimised, can be downloaded or found in instant-play mode and has a high return to player percentage. Find this one at Realtime Gaming casinos.