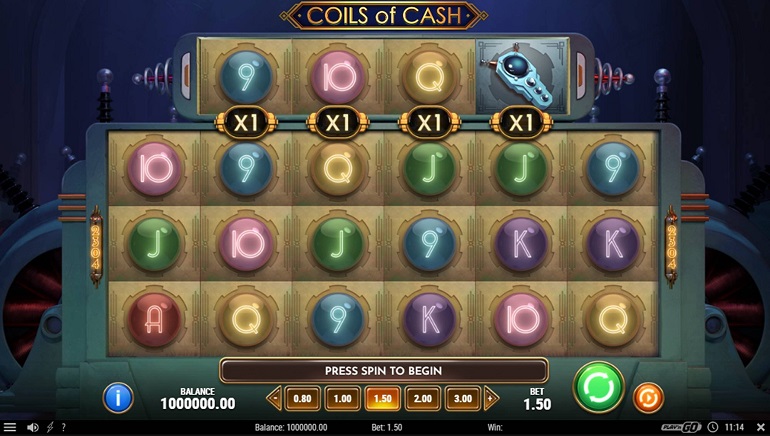 The new slot from Play’n GO, Coils of Cash, is a retro-futuristic slot with a high paytable. Highly volatile, Coils of Cash can award a maximum win of 30,000x the stake, and it does so using a cascading mechanism, free spins, and many, many multipliers.

The new slot from Play’n GO, Coils of Cash, is a retro-futuristic slot with a high paytable. The game is inspired by the World’s Fair of 1893 during which all sorts of cutting-edge inventions were unveiled. Highly volatile, Coils of Cash can award a maximum win of 30,000x the stake, and it does so using a cascading mechanism, free spins, and many, many multipliers.

Coils of Cash is a cascading payways slot with a short horizontal reel above the game’s 6 main reels. Win-Ways can go up to 2,304. Bets range between $.10 to $100 per spin, the RTP is quite standard at 96.2%, and the volatility ranks 10 out of 10 on the developer’s volatility scale.

Winning combinations are created when 3 to 6 matching symbols land in combination. When a win is scored, the symbols that created the win disappear and new ones cascade into place, potentially allowing for more winning combinations on the same spin. Symbols include 9-A royals and 4 futuristic gadgets. There is also a W wild and an energy orb scatter.

The 4-position horizontal reel at the top of the grid is called the Power Coil. Each symbol in the coil may have an activated multiplier, which increases by +1 for each cascade on the corresponding reel. Wins that include Power Coil symbol with a multiplier have that multiplier applied to them. If there is more than 1 multiplier, the values get multiplied together and can reach up to x625.

Coils of Cash may seem strangely-themed upon first glance, but once players start spinning, the true potential of the game is revealed. The multipliers of the Power Coil can lead to some spectacular wins and a potential max win of 30,000x the stake. This kind of payout makes the game not only attractive to science buffs but to anyone who dares to compete for a big win.