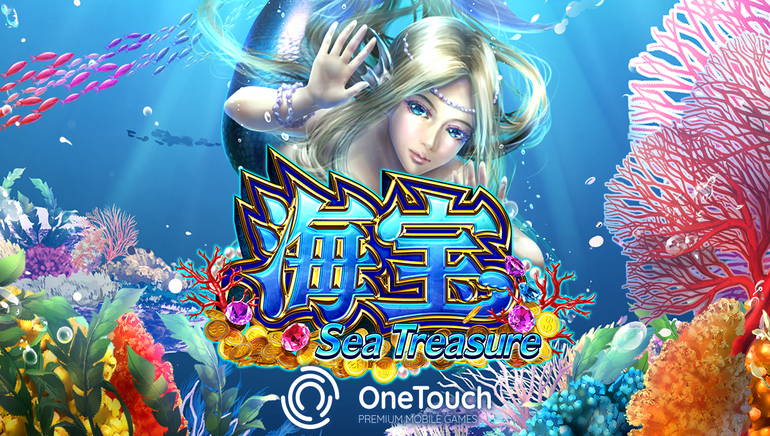 OneTouch announce the launch of their Sea Treasure online slot, where a submarine can multiply wins by up to 999x during a free spins bonus feature.

Sea Treasure is a brand new slot game from OneTouch with beautifully designed symbols and plenty of attractive features. A submarine can descend into the depths on any win, increasing a multiplier which can hit as much as 999x during a free spin round.

Mermaids, dragons, and fish appear across the 5 reels and 30 paylines of this mobile-first game that joins an expanding portfolio of slots and more from this innovative developer.

Dive Into The Deep

An Anime style and a high level of detail make the Sea Treasure slot stand out across mobiles, tablets, and desktop platforms. A metallic frame surrounds the reels, with pressure gauges and a depth meter to one side, and bright corals provide a pleasing backdrop. Clownfish, jellyfish, and high card motifs share the reels with the mermaid and fearsome sea monster.

Players can also encounter a treasure chest wild symbol, submarine scatter emblem and the Evil Eye that appears during the free games feature.

A submarine moves down the depth meter on random wins, to award a Crash Dive multiplier  It returns to the surface on the next spin and in the base games, the multiplier can hit a maximum of 5x.

The Sea Treasure Challenge free games feature starts when 3 scatter symbols land at once, with 8, 10, 15, or 20 bonus games awarded at random. A 1+ symbol adds one extra game to the total on each appearance. A win multiplier increases by 1x on each spin, but players need to look out for an Evil Eye, as any 3 on the same free spin will end the round.

The Crash Dive feature will trigger more frequently during the free spins and the maximum multiplier can now hit a vast 999x.

It's a high volatility game with an average return to players percentage of 96.15%.

Founded in 2015, OneTouch is incorporated in the Isle of Man and develops mobile-first online casino games for the European and Asian markets. The range encompasses classic table games, such as Blackjack, Poker, and Baccarat plus a wide selection of slots, such as Travelling Treasures - Brazil, Lucky Lion, and Sumo Showdown.

“Sea Treasure gives players a surreal deep diving experience, with some clever and surprising features adding to the fun and increasing player engagement.”