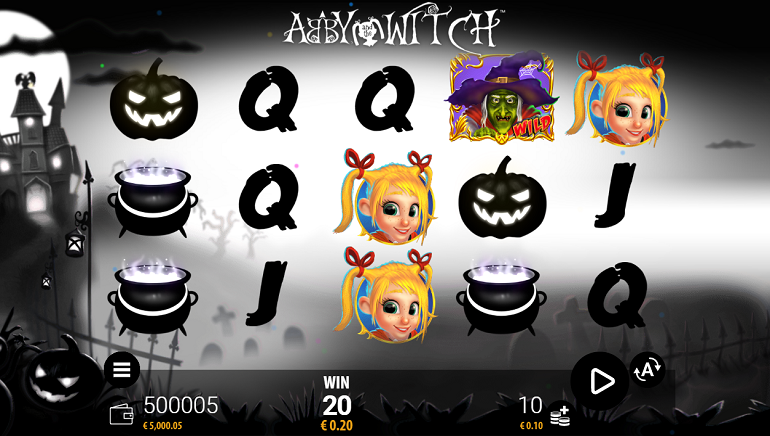 Abby and the Witch from Zeusplay is a spooky slot that’s come out just in time for Halloween. Features include random respins, free spins, and more free spins.

Abby and the Witch from Zeusplay is a spooky slot that’s come out just in time for Halloween. When the game kicks off players will hear a cackle reminiscent of the Wicked Witch of the West. Actually, the green-skinned witch on the reels looks like her too. Features include random respins, free spins, and more free spins.

In addition to the green-skinned witch, the slot is reminiscent of the Wizard of Oz film because it’s mostly in black and white. The exceptions are the witch symbol, Abby symbol, and some colorful combustions when a win is scored. The backstory, as told by Zeusplay, is that the witch has stolen all the colors and, for some reason, a little girl named Abby must fight her to bring them back. But the story has no ramifications on the actual game. While there are bursts of colors from wins, there are no fights or interactions between the two main characters.

Abby and the Witch is 5-reel, 3-row, 10-payline slot that’s playable on all devices. Bets range from $.10 to $30. At the same time that the volatility is very low, so is the RTP. It comes in at 94%, significantly below average.

This game is not symbol-rich, with only J-A royals, jack o’lanterns, cauldrons, and blinking, blond-haired Abby symbols. There is also a green-skinned witch that serves as the wild and the scatter.

In the base game, random respins can be triggered, but the main action comes from the Bonus round, which is triggered when 3 witches land on the reels. During the Bonus round, symbols on any position can randomly turn into witch symbols and extra free spins are randomly awarded.

Zeusplay clearly wanted to create a spooky slot that could be played come Halloween season or any time of year. The theme of the witch and the background graphics aren’t altogether bad, but the execution leaves something to be desired. It’s certainly light on features, making it better-suited for novice players. Additionally, the low RTP may be scarier than the black and white world the witch has conjured up. Players brave enough to risk it can play Abby and the Witch at Zeusplay online casinos.