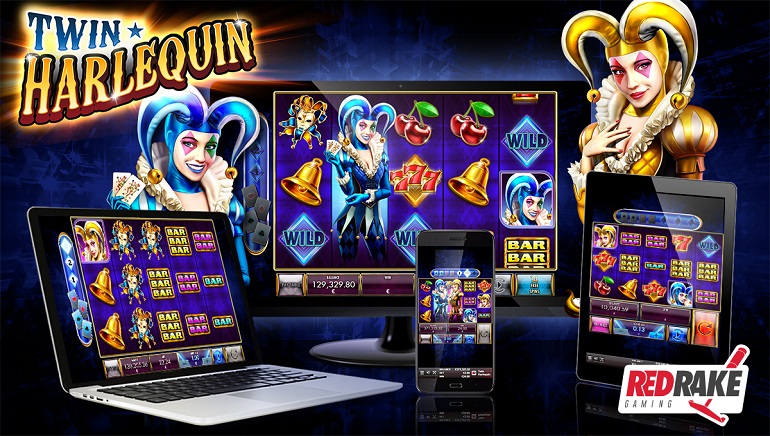 The Twin Harlequin slot from Red Rake Gaming stars 2 jesters. These ladies treat players to coin wins and up to 100 free games.

Players will be able to meet 2 colourful jesters when they play the new Twin Harlequin slot machine from Red Rake Gaming. This 5x3 slot machine features 25 win lines with tumbling reels, and the chance to spin Roulette wheels to launch bonus games.

A Burst Of Colour On PCs And Mobiles

Twin Harlequin sets the reels against a dark blue backdrop. This contrasts with the brightly-coloured symbols that include single, double and triple BARs. Higher prizes come from landing golden bells and red 7's across the paylines. Winning symbols vanish in a tumbling reels mechanism, which can lead to several wins from a single paid spin if new combinations are created.

The top-paying symbol of the Twin Harlequin slots game is the wild, which pays back 200x the total bet if it crosses a whole payline without substituting for any other.

Although the yellow and blue harlequin characters only pay small prizes, players who manage a series of 5 tumbles in a row will launch a valuable feature hosted by the twins. The view changes to 2 Roulette wheels, with a bonus reel in the middle.

This central reel spins first, triggering the blue, yellow or both Roulette wheels, depending on which symbol is seen. The yellow wheel spins up win multipliers, while players who trigger the blue wheel will win a number of free games. If both wheels spin, lucky players get a coin prize, followed by free games.

It's possible to get up tom 100 free spins, during which the tumbling reels feature is still in effect.

This PC and mobile-optimised game is available to play for stakes of between 0.25 and 75.00 per spin. Like all Red Rake Gaming slots, it comes with a generous RTP and can be played in 22 languages across regulated markets. Players can now join the jesters at sites that use games from this Spanish developer.