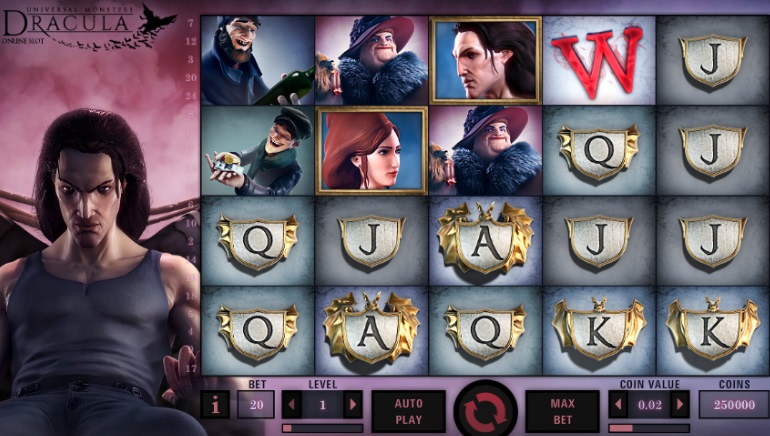 Dracula has risen once again after decades of slumber. The centuries-old count has been revived as a new video slot at NetEnt casinos.

NetEnt has once again teamed up with Universal Pictures for another collaboration that will see the Scandinavian igaming developer release a video slot based on a monster movie. Players can now access NetEnt’s Dracula slot from April 2014 onwards, joining slots based on Frankenstein and Creature from the Black Lagoon.

From a visual standpoint, NetEnt has dramatically raised its 3D video standards. A terrified young girl is chased through darkness along cobbled streets, desperately trying to outrun a swarm of bats. The camera then switches to Dracula’s viewpoint as he closes in on his prey. NetEnt has focused strongly on story to set the scene for this horror-themed slot.

Dracula has been designed for a simultaneous release across NetEnt casinos available on desktop and mobile devices like No Bonus Casino, BETAT Casino, and Casino Cruise. The larger sizes of mobile screens has allowed for NetEnt to build Dracula with five reels and four rows, allowing for 20 symbols to appear on screen instead of the typical 15.

To make use of the higher number of symbols, NetEnt has assigned 40 paylines. Comparatively, most online slot games incorporate 15 to 25 paylines instead. Having more opportunities to win is going to prove enticing for players, who should already be drawn to Dracula for its spine-tingling visuals.

The inclusion of free spins, stacked symbols, and stacked wilds are to be expected. However, NetEnt has attempted to shake up the special features by adding the Bat feature. This result in Dracula transforming into a swarm of bats that lands on the reels and changes into a symbol completely at random.

NetEnt chief product officer Simon Hammon considers Dracula to be “another truly standout slot game”, while the Bat feature “showcases NetEnt’s commitment to innovation”. Hammon is “without a doubt that players will love this gothic slot”.