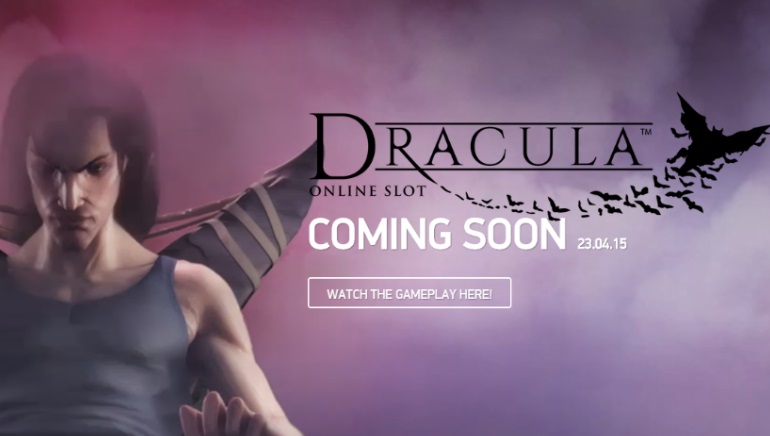 Three months into 2015 and NetEnt is releasing its third big slot this year. After Tornado: Farm Escape and Steam Tower, the Swedish software giant is preparing to bring a new branded game next month to desktops and mobiles: Dracula Online Slot. The game is expected to hit online casinos April 23th.

Once again, NetEnt has teamed up with Universal Studios in order to bring to online casinos a spooky and fun video slot version of the 1931 film "Dracula" featuring Bela Lugosi as the Count himself. NetEnt's Dracula differs from the film's Dracula appearance-wise, as he was given a more modern look, yet the famous monster remains menacing just the same.

Dracula is a 5-reel, 4-row, 40-payline video slot that impresses with 3D graphics and a unique atmosphere – Count Dracula himself sits to the left of the reels throughout the gameplay as players spin the reels, reacting to the happenings on the reels. The slot is full with bonus features including free spins, stacked symbols, stacked and regular wilds and the unique Bat feature.

Randomly triggered throughout gameplay, the Bat feature turns Count Dracula himself into a swarm of bats who land on the reels and turn the symbols randomly in a cluster, with the outcome including other symbols, wilds and bonuses.

The free spin feature in the Dracula slot revolves around the Count's romantic involvement with a young woman. The characters of these two serve as stacked symbols, and when they land together on reels 2 and 4, Dracula reaches out to the lady, activating the free spin mode which gives players 10 re-triggerable free spins which are also subject to the Bat feature – a recipe for a really big winning potential.

When it hits next month, Dracula will be playable on desktop and NetEnt's mobile Touch platform at top NetEnt-powered casinos such as Free Spins Casino, No Bonus Casino and BETAT Casino.