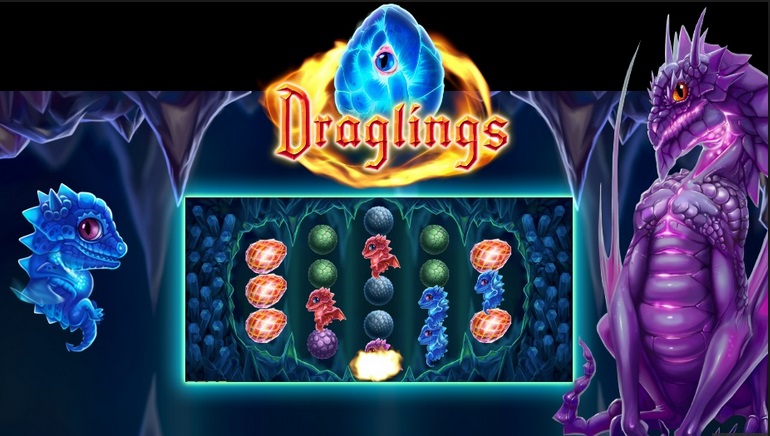 Draglings is the latest video slot to come from Yggdrasil Gaming. Play with cute dragons in a game featuring an extremely quirky design.

The unfathomable successes of franchises like the Lord of the Rings, the Hobbit, and Game of Thrones has proven that the general public has a strong appetite for the fantastical. And in response to the ever-increasing interest in fantasy, Yggdrasil Gaming has launched a brand new video slot, entitled Draglings, which is centred on dragons, a staple of the fantasy genre.

To summarise, Draglings is a video slot in which players can benefit from free spins, stacked symbols, spreading wild symbols, and a jackpot of up to 30,000 coins. When betting, players have the choice of activating 40 paylines and setting a coin value worth from €0.005 to €1 (€0.005 is not a typo).

Continuing with the unusual, Draglings is not your average five-slot game. While there are five reels, not all of them possess the common number of three symbols on each. The interesting design sees three symbols appear on first and fifth reels, while the second and fourth each have four symbols. Lastly, the middle reel will display five symbols after each spin of the slot’s reels.

Visually, the slot looks the part for a dragon-themed game. In terms of the setting, all of the action takes place inside of a blue cave, which is clearly a dragon’s lair. And instead of using playing card symbols to fill things out, Yggdrasil has bee more creative by designing dragon eggs style to compliment the free spin logos and dragon wild symbols.

When discussing the launch of Draglings, Yggdrasil Gaming CEO Fredrik Elmqvist explained that the development firm didn’t even have any slot games on the market in December 2013, and now there are nine after the latest introduction. Elmqvist amusingly explained that the developer had been trying to “breathe a little fire into the casino games sector” by creating Draglings.

Online casinos like Vera and John Casino and EuroSlots Casino feature games from Yggdrasil. Keep an eye out for this upcoming addition.