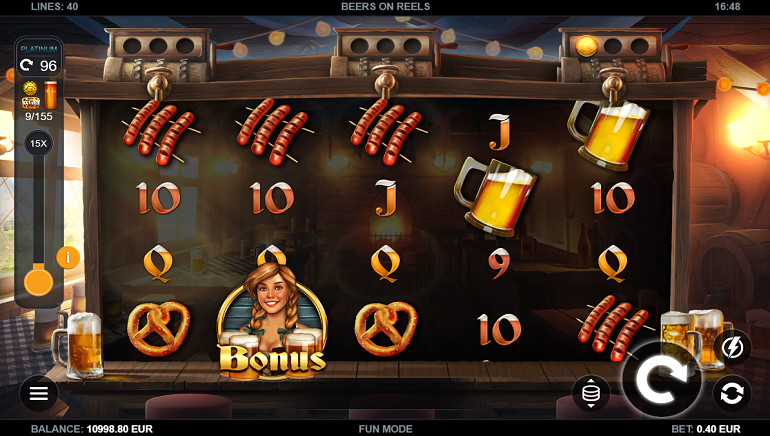 The brand new Beers on Reels slot comes from Kalamba Games. It's an Oktoberfest-themed game with a selection of innovative features.

Even though it's cancelled this year, Kalamba Games is celebrating Oktoberfest. The new Beers on Reels slots game packs the screen with pretzels, sausages, accordions, and barrels of lovely beer.

It's a 5-reel, 40-line game where players get to choose Missions, winning when their chosen symbols land over a set number of spins. Beers on Reels also features stacked wild symbols and free spins.

The 5x3 symbol grid sits within a bar packed to the wooden beamed roof with beer barrels. Taps sit above reels 1, 3, and 5, and stein glasses of beer rest on the bar. Along with the themed symbols, players will see playing card icons and an attractive barmaid carrying beers to her happy customers. A barrel is the wild symbol of the Beers on Reels slot.

Before spinning the reels, players are invited to undertake Missions, which pay out prizes if a selected number of symbols turn up within a set number of spins. Bronze, Silver, Gold, and Platinum level Missions are available, with different levels of difficulty and prizes in each.

Once players collect coin symbols on any of reels 1, 3, and 5, the Wild Column feature sees beer pour from the taps above the reels. This turns the whole reel wild for the next 3 spins. The barmaid is a bonus scatter symbol who triggers 10 free games when landing in 3 or more places at once. Any Wild Columns stay active for the rest of the free spins feature, and silver coins add 1 extra spin to the total.

Beers on Reels can be played in desktop and mobile formats for stakes between 0.40 and 60.00 per spin. It has an average return to players percentage of 96.18%, and wins can reach 1500x the total stake. Players can celebrate the arrival of this Kalamba Games slot at some of the top online casinos.