Dude, The Big Lebowski is Now a Video Slot 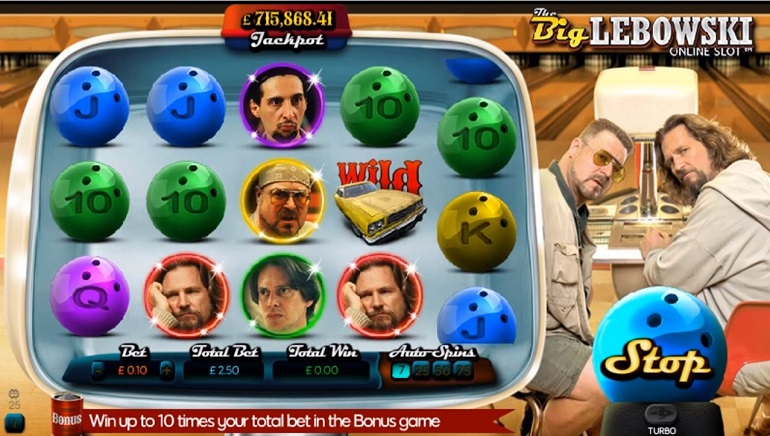 Film fans can play the official Big Lebowski slot for the chance to win a progressive jackpot and unlock the highly rewarding bonus game.

The Big Lebowski slot is a game designed for fans of the cult film directed by the Coen Brothers in 1998. Fans can go find the new slot over at 888casino, where they can reacquaint themselves with Jeff Bridges’ iconic character “The Dude”, plus the many other quirky characters who appear in the film.

Hang Out with the Dude

Random Logic is the software developer that sought out Universal’s permission to create an officially licensed slot. This means that the Big Lebowski slot features genuine imagery from the film, displaying the likeness of Bridges plus fellow actors John Goodman, Julianne Moore, Steve Buscemi, and John Turturro.

Each of the actors’ characters are displayed on a five-reel slot interface that features bowling balls as the symbols, which pays homage to the film’s heavy use of bowling. The slot provides a multitude of opportunities to win from the 25 paylines that have been assigned to the five reels. After each spin, there will be 15 symbols on the screen at any one time.

Random Logic has added extra flare to the Big Lebowski slot by integrating a lucrative progressive jackpot that can be won at any level of the game. However, Random Logic has developed a system whereby players are have a greater chance of winning the jackpot in this progressive slot by playing with a larger stake on each spin.

There are yet more levels to the Big Lebowski slot. The first is the Spare free spin, which occurs on any spin where players do not score any winnings. Unfortunately, though, it is not possible to win the progressive jackpot with the Spare. Another feature is the Goodnight, Sweet Prince bonus game, which triggers when the red tin can lands in the middle of reels one and five simultaneously. This will let players pick one of five random prizes.