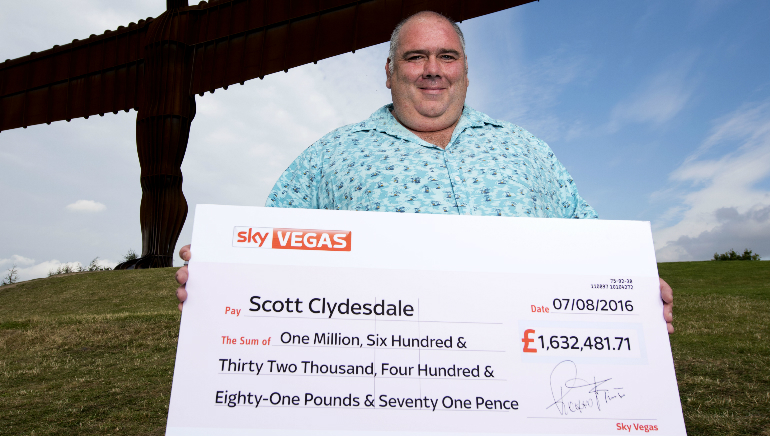 Most of us don't really believe when we hear that someone has won a big amount of money at an online casino. It always feels like something that doesn't happen in real life or, at best, always happens to other people. That's exactly the way Scott Clydesdale, a construction worker from Durham, felt.

Until a few days ago, that is.

It was just an ordinary day for the Durham local who picked up the £20 bonus at Sky Vegas casino to try his luck. It is safe to assume that he, like most of us, would be perfectly happy if he ended up with an extra few hundred quid in his pocket.

Scott's game of choice on that faithful day was the Toy Factory progressive slot and things weren't going particularly well. After some twenty minutes of play, his bonus was almost gone and it seemed like it was going to be just another valiant effort with nothing to show for it.

Just as Scott's balance was about to hit zero, everything went crazy. The game stopped and he was facing the message notifying him he won £1,627,168. Like most of us, he refused to believe it at first. That kind of stuff just doesn't happen to ordinary people - except that sometimes it does!

This was one such occasion and when the initial shock passed, Scott started to realize he was a proper millionaire.

He was awarded his £1.6 million check at the Redworth Hall Hotel in Durham. The money, he explained, will go a long way in pursuing some of his dreams which include going on a first-ever real vacation and following darts and Peter Wright more closely.

Additionally, with a wedding just around the corner, the timing couldn't have been better for Clydesdale. Not that it is ever a bad time to win £1.6 million.