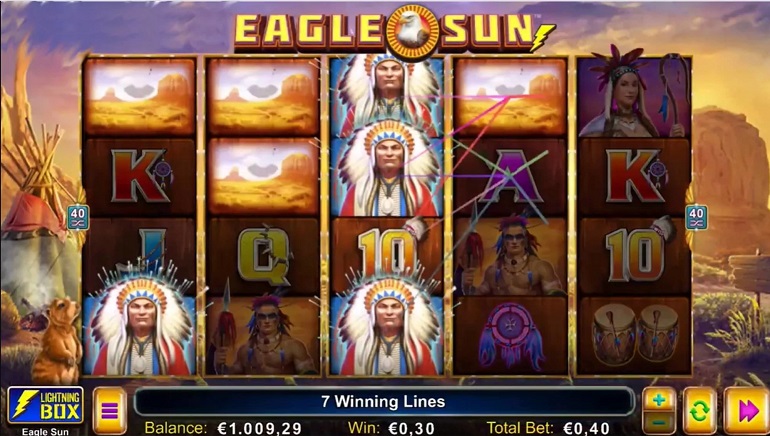 Lightning Box Games is expanding its portfolio with the launch of the Eagle Sun slot, which can be doubled in size and paylines.

Lightning Box Games has taken the release of its brand new Eagle Sun slot as an opportunity to explore an often under-explored theme that is Native American culture. This launch follows in the footsteps of other notable Lightning Box slots, including Stacks of Pearls, Respin Racer, Astro Cat Deluxe, Lightning Leopard, and Silver Lion.

A beautiful golden sun shines over the desert locale chosen for a Native American tribe to erect its teepees. Positioned on top of that scene is an expansive slot interface crafted with five reels and four rows. Having a fourth row enables Eagle Sun to display 20 symbols rather than the commonly encountered 15.

Wagering is majorly driven by the fact that the 40 paylines are fixed instead of being adjustable. As a result, this means that the minimum betting value can be assigned as €0.40 for the base game. Wagers can then increase by increments of €0.40 and can climb all the way up to the €160.00 ceiling.

During play, winnings can be generated by matching up three or more chiefs, warriors, women, and various other Native American symbols on the same paylines. For added assistance, Lightning Box has included wild symbols that are represented by eagles and deserts.

The eagle image will also serve a further purpose in being used to act as a scatter. One re-spin will be provided for every eagle that contributes to a winning payline. This will lead to only eagles or blank symbols to appear for the re-spin, while all wilds collected will be randomly displayed over the reels.

A dramatic change will be caused when three or more bonus totem symbols are landed. In turn, this will cause the interface to double in size from 20 to 40 symbols and from 40 to 80 paylines. Also provided will be seven free spins and a single Super Eagle Spin (re-spin included).