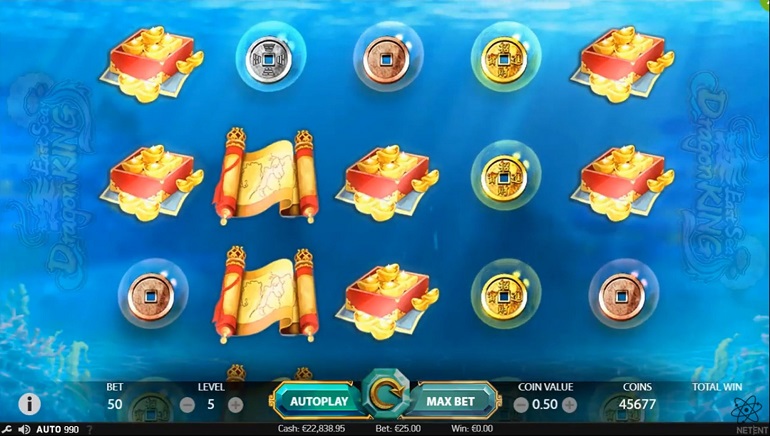 East Sea Dragon King is the latest NetEnt slot to release with Expanding Wilds and Re-spins as part of the Cluster Pays series.

In East Sea Dragon King, users can play on a mobile-compatible interface built with five reels and three rows for 15 symbols to appear with every spin. Before each turn, players can assign their preferred wager by adjusting the coin value from €0.01 up to €2.00 and the wagering level from one up to 10.

When play begins, the aim is to land matching symbols within clusters of five or more symbols, according to the paytable. Symbols can be defined as forming a cluster when appearing beside or above in adjacent positions. A high payout multiplier of 5,000x is available for clustering 15 red box symbols together.

NetEnt has designed the East Sea Dragon King as a sea-dwelling man with blue skin, purple antlers, and bushy white eyebrows and facial hair. This undersea monarch is used as the wild symbol and is capable of substituting for any missing symbols in the entire game.

The East Sea Dragon King also has the potential to become an Expanding Wild when one or more symbols have landed. The king automatically expands to fill the entire reel and will also provide the player with a complimentary re-spin. In the event of matching five wilds in a cluster, this can trigger a maximum payout worth 10,000x.

In terms of functionality, all winnings are provided once the wilds have expanded and before any re-spins occur. All wilds will expand and remain in place until all re-spins have been resolved. There is no limit on re-spins and it’s possible for players to keep triggering them with Expanding Wilds.