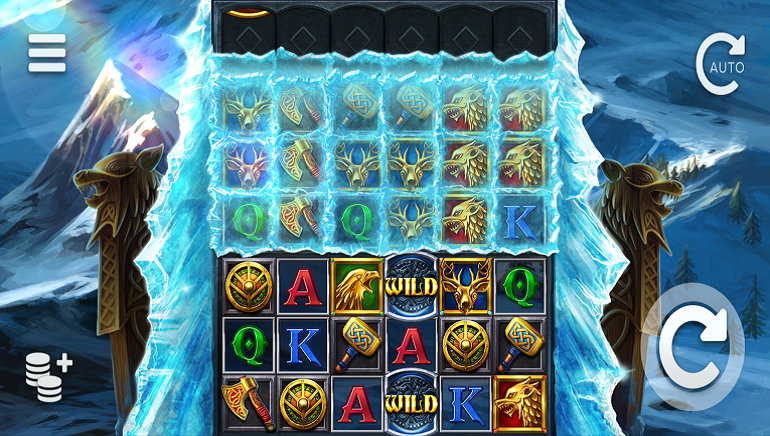 Ice Wolf is a slot that plays with the feel of a video game. ELK Studios has designed the experience with a range of special symbols.

ELK Studios has woven together elements of wildlife, fantasy, and the great outdoors in an adventurous new video slot. Ice Wolf tells a tale of a person trying to reach a remote peak. Aided by a wolf guardian, the player is aiming to avoid being halted by the mythical Ice Wolf.

Ice Wolf has been developed with mobile compatibility for smartphones or tablets running on Android, iOS, or Windows. Modern devices should prove capable of displaying an ambitiously made video slot that begins with six reels and three rows before potentially reaching a maximum height of seven rows.

The display looks more akin to a video game than a video slot. A layer of ice prevents the top four rows of symbols from being usable. The upper layers can only be open by inspiring a sequence of wins. This is possible by matching three or more symbols in adjacent reels. The slot will then continue to re-spin until the winnings stop.

ELK Studios has also included built-in betting strategies. Optimiser wagers a percentage of the balance, Leveller can rise after five straight losses, Booster increases with a loss, and Jumper is intended to raise in conjunction with a winning spin and reset following a loss.

Ice Wolf is a potentially lucrative slot that can yield up to €250,000 worth of winnings. If Ice Wolf wilds are aligned vertically on the same reel, then they can break through the ice to clear a trail. A re-spin shall also be provided, like when a win occurs in the base game.

A number of other special symbols can come into play when the top level of ice is cleared. Aside from wilds, there are multipliers of 2x, 3x, 5x, 10x, and 50x. In addition, there are +1 symbols that are used to credit players with re-spins.