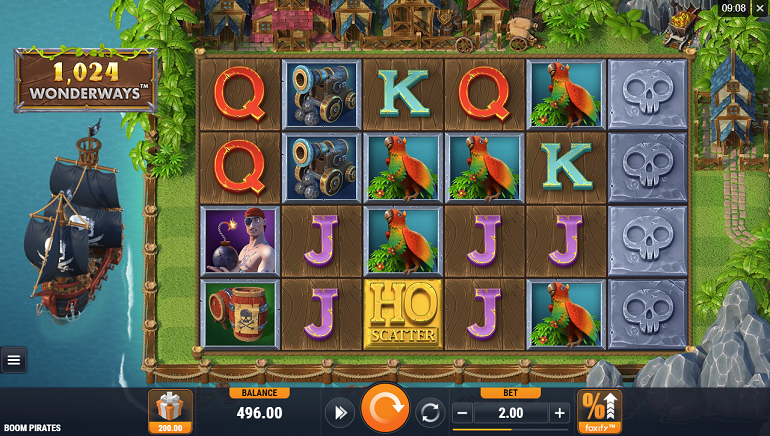 The latest slot developed by Foxium features a Wonderways concept and offers opportunities for some sizable wins especially in the free spins round.

The latest slot developed by Microgaming partner studio Foxium takes players on a wild sea adventure filled with pirates, cannons, and big winning opportunities thanks to the Wonderways concept, allowing for up to 10,077,696 ways to win on each spin. The Booming Pirates slot offers fast-paced gameplay, quality graphics, and a few in-game features with big potential.

Boom Pirates starts players off with a visible 5x6 grid featuring 7,776 Wonderways (win ways). There are four more reels containing six rows each and unlocking these increases the number of Wonderways. When all nine reels are fully unlocked, there are 10,077,696 featured on the board.

Reels are unlocked with a randomly triggered Boom Pirates feature, which fires cannon balls onto one or more reels for the next spin. In the base game, reels only stay unlocked for the next spin. In addition to this one, there is also Mary's Swashbuckling Attack, which can trigger on any non-winning spin and will see Mary swing across the screen and generating at least one five-of-a-kind win.

Players can turn on the special Foxium feature which increases their stake by 50% but also improves the chances of cannons being fired and unlocking Wonderways in the base game.

To trigger the free spins bonus, players need to land three YO-HO-HO scatters on reels one, three, and five. This initiates the bonus round with ten free spins and landing additional three scatters during the bonus adds five more spins every time.

In the free spins, any reels unlocked with the Boom Pirates feature remain unlocked for the duration of the bonus so it is possible to unlock the full grid and have a number of spins with all 10,077,696 active, creating serious opportunities for big wins.

For those short on patience, the game also offers a possibility to buy the free spins feature straight-up at the cost of 100 times the stake.