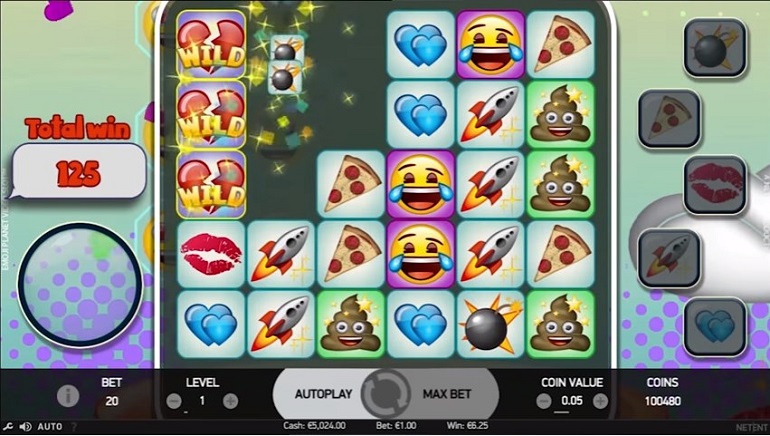 Emojiplanet™ is the amusing new slot that’s out now at NetEnt casinos. Simply match up hilarious emojis for the chance to win.

The Emoji Movie has recently taken the world by storm. Meanwhile, iGaming software developer NetEnt has ensured that online casinos will now see the slot game equivalent. Emojiplanet™ has released today at leading NetEnt casinos to give players yet another way in which to have fun with emojis in their daily lives.

Emojis have majorly taken off in recent years, having been created as a more visually impressive upgrade on the basic emoticons that everyone used on their mobile phones. Well, smartphones have been the standard for years now and emojis represent a vital part of the communication process for many people across the globe.

In Emojiplanet™, NetEnt has elected to include a whole host of fun and amusing emojis. There are lipstick kisses, two blue hearts, pizza slices, rockets, bombs, and even the ridiculous poop emoji. These will act as the means through which players are able to unlock winnings while playing Emoji Planet.

Emojiplanet™ seems to be designed like the NetEnt Cluster Pays series, which also features Aloha and the forthcoming The Legend of Shangri-La. The interface is larger than standard slots and has been made using six reels and five rows of symbols. There are 30 in total, with players having to create clusters of five or more matching symbols in order to win.

There is an avalanche system in place where new symbols can drop downwards for the chance to trigger successive victories. In addition to creating winning clusters, players will also aim to fill up the emoji meters at the side of the screen. These are attached to each of the five main emojis and will unlock special features.

The bomb feature can blow up eight random symbols and leave a five to 100x multiplier, while the pizza can overlay a three-by-three grid of symbols. Lipstick can lead to three sticky wilds, rocket will deliver 10 stacked wilds, and the two blue hearts will apply a multiplier. Emojiplanet™ can be played now at NetEnt Casinos, with the avalanching symbols giving players the chance to win up to 5,000 times their base game stake.