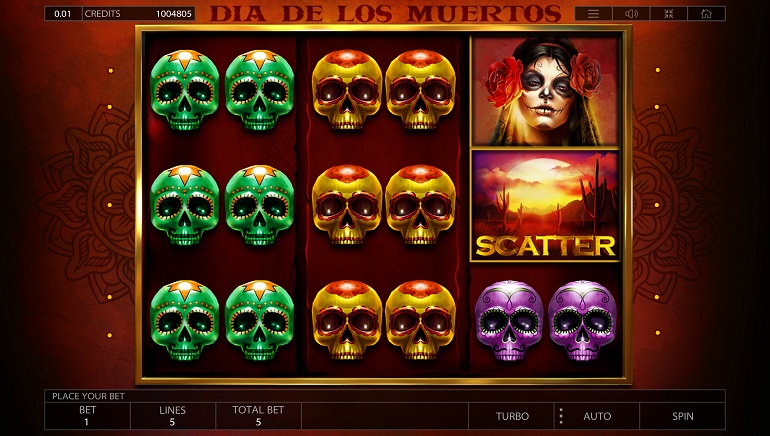 Dia de los Muertos is a new slot from Endorphina and based on the Mexican holiday celebration of the same name.

From the start of October 2018, a number of software provider have been realising brand new slot games that are intended to coincide with Halloween. And the vary latest example is Endorphina Gaming which has brought out the Dia de los Muertos slot in time for All Hallows’ Eve.

Halloween is especially notable in Mexico, for it forms part of a three-day celebration that culminates in Dia de los Muertos, which translates to Day of the Dead in English. People often decorate their faces to resemble the colourful skulls that are used to celebrate the holiday. In turn, this has inspired Endorphina for the company’s latest slot release.

Ahead of the slot’s release, Endorphina revealed that the game had been to provide HTML5 compatibility. As a result, Dia de los Muertos shall be playable on a variety of desktop- and mobile-based operating systems, such as Windows, MAC, iOS, and Android.

For wagering, Endorphina has implemented a system in which the value of individual coins can be raised from €0.01 to €1.00. In addition, there can be up to 10 coins staked on a single spin, while players can activate up to five of the adjustable paylines displayed in the three-reel slot.

A character called Catrina can deliver the highest payout of 500x when three of her symbols are aligned on one payline. She then serves the additional purpose of becoming a wild symbol whenever she lands during free spins, but Catrina cannot sub for the scatters.

The scatter symbol is a desert image of a sunset and cacti. Although worth only 50x when three are matched, the scatters provide the added benefit of unlocking 20 free games. Finally, there is a card-based mini game that allows for players to risk doubling their winnings in a hi-card draw against a dealer.