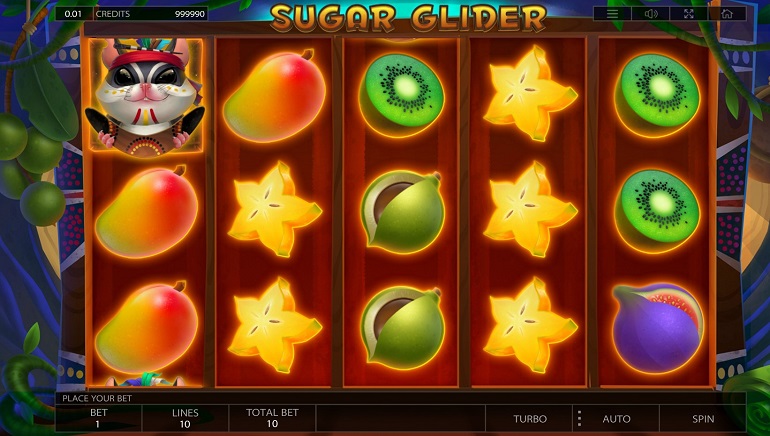 Featuring adjacent pays across 10 paylines and an expanding wild symbol, Sugar Glider may not be all that innovative but it is still quite entertaining to play.

Super heroes come in all shapes and sizes and are found in the strangest of places, as demonstrated in the latest Endorphina Gaming slot release, named Sugar Glider. The Czech developer took an opportunity and unveiled its new game during this year's Sigma exhibition, taking place in Malta.

The Protector of Tropical Forests

The game is placed inside a tropical forest, bringing five reels filled with colorful exotic fruits. The main hero, Sugar Glider himself, is the one in charge of protecting the natural beauty from all dangers, especially the evil praying mantis, which appears as the expanding wild symbol on the reels.

Graphics are cartoonish but nice colors and animations give Sugar Glider a really modern feel despite the absence of any too elaborate elements. Background music is somewhat repetitive but the calming tune can definitely help keep players spinning a little while longer.

The Sugar Glider slot is quite straightforward as it features 10 paylines across five reels and there are no special bonus features to unlock. One thing players will notice is that wins across all paylines are paid on adjacent reels, so three matching symbols will always pay as long as they are on a payline and on adjacent reels, even if the combo starts on the second reel.

The symbol to keep an eye out for is the praying mantis symbol, which acts as a wild, replacing for all other symbols, and expanding to cover all adjacent positions on the reels. The ideal scenario is the one where the praying mantis lands on the middle position on the third reel, expanding in all directions and adding nine wilds in total.

Although it doesn't bring much new in terms of gameplay or features, Sugar Glider is likely to garner some interest from those players who like their games nice and simple but still with a potential to produce some nice payouts on any individual spin.