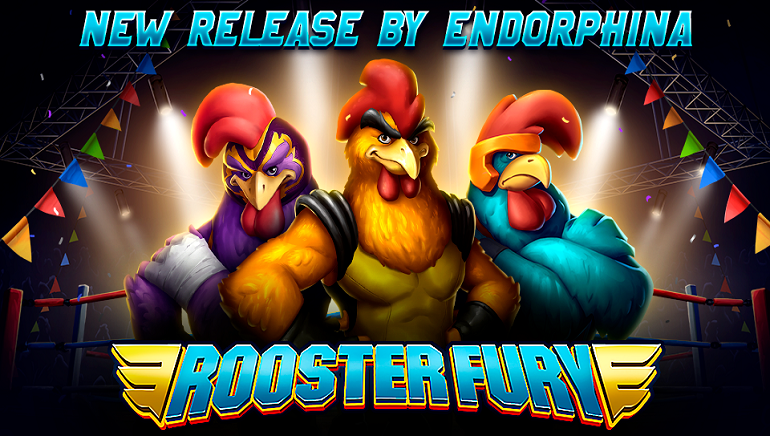 The Rooster Fury slot is brand-new from Endorphina. It's a cartoon style game that stars wrestling birds across 3 reels and 5 paylines.

Casino games developer, Endorphina, combine farmyard animals and Mexican wrestling in their newest game. Rooster Fury is a comic-style slot machine that plays out on 3 reels and 5 lines filled with 7 fun characters. Special features include a knockout free spins round, where roosters fight for big prizes across up to 30 bonus games.

The cartoon style places the 3x3 symbol grid in a wrestling ring. Feathers will fly when any of the 7 roosters land across paylines, with the highest paying symbol worth 100x the bet.

Any 3 or more game logo scatter symbols trigger the Fights Between The Roosters free games feature. A rooster is picked at random to fight on behalf of the player over the course of up to 30 free games. The chosen character is on one side of the reels and its opponent on the other, with the winner being the rooster that appears more often. If the selected rooster wins, players collect extra rewards.

A gamble option is available on every win. Players select from 4 face-down playing cards and if their chosen card beats the Dealer, the win is doubled. Gambles can be repeated up to 10x, but, of course, a losing card removes the triggering win, plus any gains made so far in the gamble game.

This is a fun game with a humourous theme, but some serious winning potential. Rooster Fury has a bet range of 0.05 to 50.00 per spin and comes with an average return to players percentage of 96.05%. It's compatible with desktop and mobile platforms, and available now at Endorphina sites.

Gretta Kochkonyan, Endorphina's Head of Account Management, shares her thoughts on their newest slot, ''Let your players catch their luck by the tail and feel the rush of adrenaline in June 2021! They'll soon be able to join the real battle in Endorphina's new Rooster Fury!''