Endorphina Surprises Everyone with the First Vaping-themed Slot Diamond Vapor 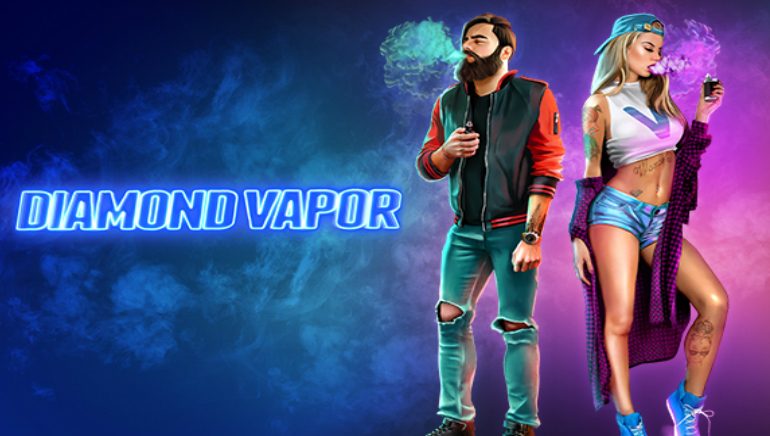 Continuing on their success with the Twerk slot, Endorphina has released the first-ever vaping themed slot, aptly titled Diamond Vapor.

One of the more colorful game developers in the market, Endorphina has been exploring some rather novel and unusual themes in their latest releases. First, they introduced Twerk, the first-ever slot to feature twerking as its central theme. The unusual theme coupled with some nice graphics and exciting gameplay helped this game gain a lot of popularity with the players and encouraged the company to continue down the same path.

Endorphina's new slot, aptly titled Diamond Vapor, revolves around vaping - a modern trend that's become very popular over the past few years, so the company figured it was high time to honor it with a fully-dedicated casino slot.

Various fruits, like lemons, plums, and cherries, have been featured in thousands of slots games over the years. This gave Endorphina developers a perfect opportunity to merge classic symbols with the new trend since vaping is all about sweet, fruity tastes.

Of course, all the symbols have been reinvented in a way, so to fit with the modern, powerful looks of the game fully immersed in the vaping smoke, creating a truly unique gaming experience. Fans of vaping will fall in love with this game.

Wanting to give their new slot the maximum exposure, Endorphina made Diamond Vapor available for free play, but players can still win some nice prizes simply for giving it a try. For this purpose, the company has partnered up with one of the leaders in the vaping niche, the company after the which their latest slot was named - Diamond Vapor.

Players have a shot at winning a dinner with Keith Fairman, the Diamond Vapor founder, gift certificates, and plenty of Endorphina-flavored vaping liquids. All prizes will be awarded during the ICE Totally Gaming exhibit taking place in London in February, where the new game will be officially introduced.

The industry has recognized Endorphina's out-of-the-box approach. The company received the EiG 2016 Creative Sponsorship Campaign Award for creating the first-ever slot to support an iGaming event.

Endorphina's creative teams are clearly intent on staying the path, coming up with imaginative and unique themes for their games, with the Diamond Vapor slot being an indication of things to come in the future.