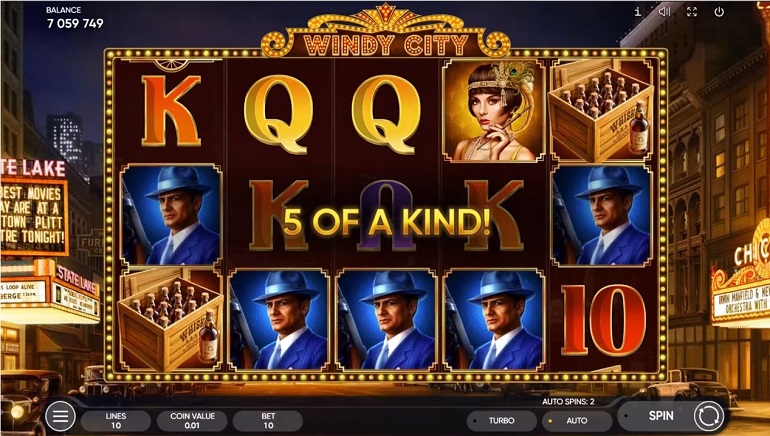 Windy City slot from Endorphina brings a hail of gunfire, bootlegging, and broads to players' screens. This Mafia-themed online slot game bristles with excitement on a 5x3 reel format with 10 paylines of Tommy-Gun themed fun!

The 1930s were rife with crime, corruption, and criminality in Chicago, Illinois. Endorphina has ramped up the action with the release of its latest slots adventure, Windy City. This 5 x 3 reel slot game with 10 fixed paylines is a live-wire of entertainment with passion, brutality, and gangsters galore.

Online casino players are treated to a tour de force in  gaming with a classic era brought to life in spectacular fashion. The 1930s in the  Windy City were  unforgiving in every way. Now, online casino players get to live out this captivating era with HD  visuals, and fully immersive game play. Windy City slot game is peppered with iconic symbols such as the Tommy gun, classic beauties, gangsters and hoodlums and many of the famous backdrops that made Chicago the centerpiece of Americana.

This slot game showcases bootlegging in all its glory, with cases of whiskey ready to be shipped off to the highest bidder. The high-paying symbols include the gangsters, the broad, and the whiskey. The low-paying symbols include 10, Jack, Queen, King, and Ace. The mobster is the Wild symbol and he substitutes for other symbols, except Scatters, to form winning combinations.

When players land 3 x scatter symbols (the gangstermobile), 10 free games are awarded. There is also a Risk Gamble Game where players are tasked with picking a high card from the deck. This game can continue 10 times, allowing players to double their winnings on every correct gamble.  This is a charismatic slot game which caps off a successful start to 2020, with several exciting titles released by Endorphina, including 2020 HIT Slot, Troll Haven, and now Windy City.