Enjoy Movie-Themed Action With The Platooners Slot From ELK Studios 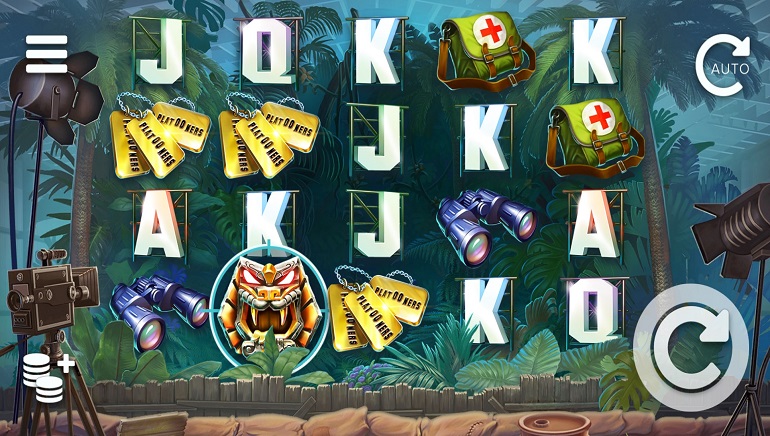 Platooners is a new slot from ELK Studios that sees cartoon characters making a war film, blasting their way to bonus features and wins of up to 250,000 coins

Crazy cartoon soldiers have joined the fight to create winning combinations across the 5 reels of Platooners, a new slot from Elk Studios.

The action unfolds on a jungle movie set, where cameras are ready to roll and the reels roll down on strips of film, launching a series of bonus features such as wild substitutions and a unique Snakes of Fortune side game.

A movie-inspired theme even extends to the lower value playing card symbols that look like letters on the Hollywood sign, while bigger rewards come from landing medical bags, dog tags, binoculars and a knife across any of the 178 ways to win.

The three Platooners can randomly trigger in-game Action Spin features, with the green guy firing rockets to fill reels 1 and 3 with identical symbols, the red soldier adding extra wilds and the yellow character creating 5 of a kind wins.

Watch Out For Snakes

The big action scene in this slot begins when 3 or more scatter symbols appear. The Platooners aim their firepower at a golden serpent that stretches across the reels in the Snakes of Fortune bonus round. As the snake is attacked, it releases coin wins and there's extra weapons, ammo, or more powerful grenades to help players collect bigger prizes.

Once a snake is defeated, the Platooners are confronted by bigger and more powerful, but also more valuable snakes.

An Action Movie On Mobiles

Platooners has been primarily designed to work on multiple mobile platforms, but also functions perfectly well on desktop PC's and laptops. Players have a number of betting options including the Leveller mode which raises or lowers stakes automatically and the Booster bet which raises on any losing spins.

Flat wagers are of course, an option and with high returns along with a top prize of 250,000 coins, they could be collecting a jungle jackpot as these soldier of misfortune get up to their antics.