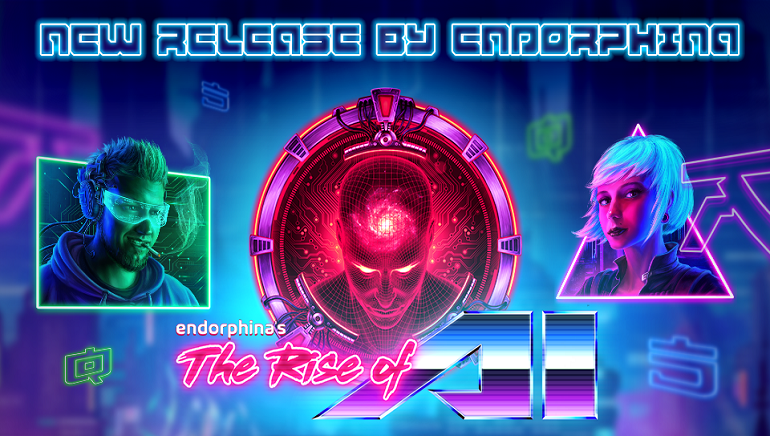 The Rise of AI is a new slot from Endorphina set in the year 2050. It's a 5-reel, 10-line game with random win multipliers.

It's 2050, and the world is under the control of Artificial Intelligence. That's the setting for new The Rise of AI slot from Endorphina Gaming. This is a 5-reel, 10-line game with futuristic images of neon card symbols and cyberpunk characters, set against the backdrop of a vast neon-lit city.

But things are not bleak, as the AI randomly awards win multipliers of up to 50x, while also offering players a chance to boost wins even further in a gamble round.

Available to play across desktop and mobile platforms for between 0.10 and 100.00 per spin, The Rise of AI will appeal to sci-fi fans on any budget. The Manga-style card symbols, and realistic characters look impressive on any device. A menacing robot pays the highest prizes when crossing any payline from the left side, paying out 50x the stake for a full run of 5.

Players just need to match 3 symbols of the same kind across a line, and it doesn't matter which reel the sequence starts from. There's no wild symbol, or free spins round, but The Rise of AI comes with a very special feature that can trigger on any winning spin. Before a spin, a prize multiplier that can reach as much as 50x, can appear to the sides of the reels. If there's a win, it gets boosted by whatever is shown.

An optional gamble round can increase wins even further. Players who choose to gamble a win will need to select 1 of 4 face-down playing cards lying next to the upturned dealer card. If they beat the dealer, the win is doubled. A successful pick can be gambled again, but of course, a wrong choice ends the round and loses the initial win.

The Rise fo AI is a good-looking slot machine, with fast gameplay and the potential to land big wins. The future arrives sooner than you think, as it's available from 17th June 2020.