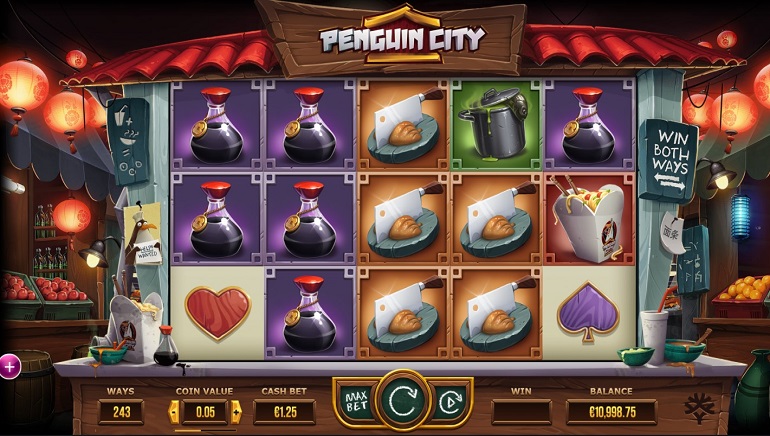 Penguin City is a new Yggdrasil slot in which players are encouraged to help free penguins in exchange for winnings.

Penguin City is a brand new slot that offers both story and playability, having been made by Yggdrasil Gaming, creators of the Vikings slots series. For clarification, the Penguin City slot is accessible now on Windows, Android, and iOS at Yggdrasil casinos.

The city is one that is ruled by the Emperor Penguin, who is holding a raft of penguins against their will. Each day, they wander round an Asian-themed city being tasked with performing duties for the food service industry, with a factory bonus level also included.

Yggdrasil has constructed Penguin City with five reels and three rows, giving players 243 ways of winning. By design, Yggdrasil has made it possible for players to win both ways by using the various symbols that have been added. Ultimately, it shall be possible to win 1,500x times the current bet, while the maximum jackpot has been revealed as €164,700.

Penguin City affords players the chance to play from only €0.10 per spin, whereas the high rollers can take the stakes all the way up to a €125.00 maximum. After assigning a preferred betting value, players have the option of activating auto-play for a chosen amount of spins.

The special features hark back to the main story by giving players the chance to trigger the Penguin Escape Mode. This can be performed by landing a wild symbol on either the second or fourth reel for a winning spin. The wild shall then remain sticky while the mode plays out until a winless spin occurs.

Penguin Escape Mode shall also result in additional sticky wilds whenever penguins land on the second, third, or fourth reels. Yggdrasil even uses the Emperor Penguin symbol to create a stacked wild that moves along one row to the right for every spin. He will keep delivering re-spins for as long as he remains on the reels.