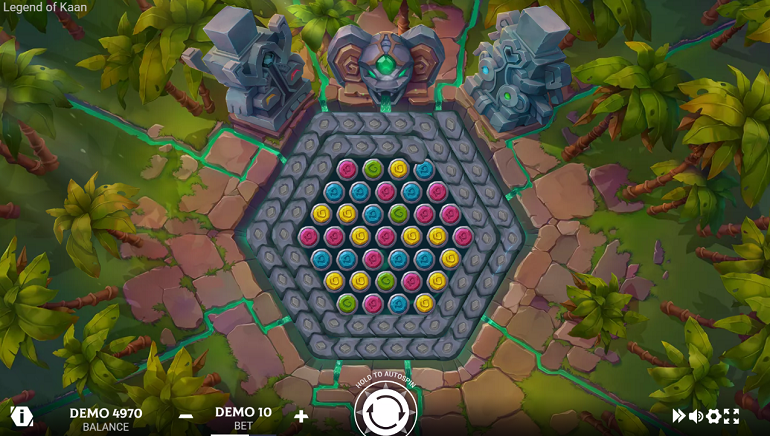 Aztec enthusiasts can check out Evoplay’s brand new Legend of Kaan for a video slot that shakes up the scene with expandable hexagon reels.

Central America has proven a fertile development for many iGaming software providers, and now it’s the turn of Evoplay to explore the area. With the brand new Legend of Kaan slot, Evoplay has developed a gaming experience that’s inspired by the ancient Aztec Empire.

Legend of Kaan begins by taking up a bird’s eye view above a hexagonal structure that starts with 37 symbols. After assigning a wager value, players can hit the circular button to begin the turn. At this point, the initial symbols disappear to be replaced by new ones.

The aim of Legend of Kaan is to create matching horizontal or vertical lines of four or more symbols. Some other video slots are based on the principle of clustering, whereas this release from Evoplay is centred on forming lines.

What’s curious about the slot is that each win is rewarded with a re-spin. Not only that, but the number of symbols in the previous win will determine how many new symbol positions are opened. Ultimately, this can go up to 91 if enough consecutive streaks of wins are achieved.

A gold and red coloured wild symbol will also play a role, but only to substitute for missing symbols as part of lines with five or more. Evoplay has programed the wild symbols to remain on the screen until they have aided in a win. Another special feature is the Serpent Gift, which entails Kaan handing out 10 energy shards with the ability to trigger a re-spin.

Free spins have the potential to be triggered if the entire playable interface is opened up. This feature will commence with five free spins, but can be improved: if all blockers removed, it is then possible to add more wilds and free spins to the totem by collecting yellow/pink and green/blue energy shards.