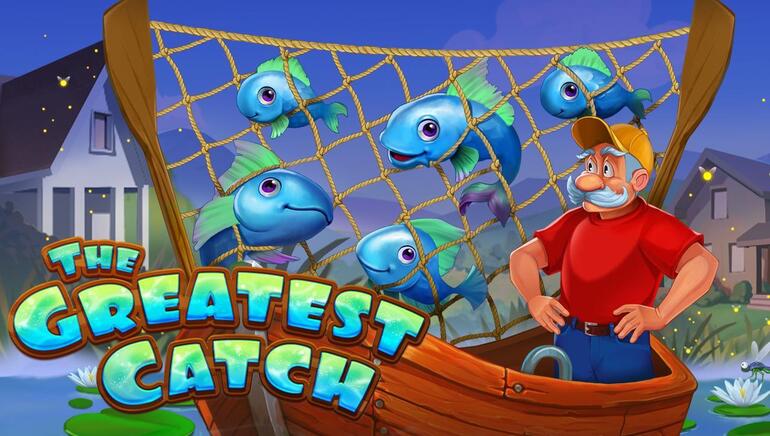 Evoplay has released a brand-new fishing-themed slot called The Greatest Catch slot, with a high return to player and immersive Fishing and Dynamite features.

Evoplay has good news for slot fans, as the software developer has released a new game called The Greatest Catch slot. The name of the game gives clear hints about the theme and punters won’t be surprised by what the slot has to offer. Players spinning the reels will follow fisherman Harry on his quest to catch the biggest fish in the ocean. Each time the reels get in motion, punters will have the chance to activate one of the special features, which can deliver the big win that everyone is hoping for.

Evoplay’s latest release is a great-looking slot optimized for mobile devices with graphics that will appeal to punters who appreciate themed slots. The reels are populated almost exclusively with symbols with a decidedly marine theme, with Harry as the protagonist. Players act as trustworthy sidekicks to the old fisherman as they help him reel in the big catch. The Scatter, Wild, and Fish symbols spice up an already exciting standard game and can pave the way to big winnings.

Speaking of big wins, the maximum amount that can be won when playing The Greatest Catch slot is equal to 10000 times the bet. It is the wild symbol that plays the most important role in the standard game, as it can substitute the other symbols on the reels to create winning combinations. When this happens during free spins, the wild symbol is more powerful because it can appear on any reels. It also activates a buoy, and when four of them are triggered, players receive an additional ten bonus rounds.

Check Out the Fishing and Dynamite Feature

Free spins act as a portal to the biggest wins in the game, as it is during this phase of the game, that the Fishing feature is activated. Wild symbols are empowered and can collect the Fish symbol values to increase the total winnings when the reels stop spinning. At the same time, the Dynamite feature is triggered automatically whenever a spin ends without again. The only requirement is for at least a Wild symbol to remain on the reels, for six regular icons to be replaced with Fish symbols.

Ivan Kravchuk, CEO at Evoplay, expressed his enthusiasm for the latest release of the new game. It highlighted the immersive nature of the game, the high-paying features, and the use of the world-class game engine Spinential. Players enjoy loading times that are up to 10 times faster, the autospin feature, and an intuitive history mobile bar that empowers players to monitor their performance.