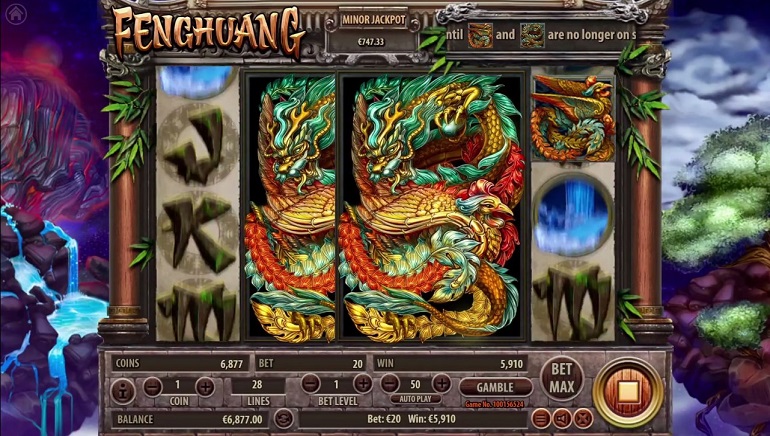 Habanero's new Fenghuang slot pulls you into the world of Chinese tradition and mythology, featuring magical birds, dragons, and much more.

Habanero, an online casino games provider that's released a few impressive titles recently, is back to dazzle us. Their latest Fenghuang slot, which should become available on a number of online casinos in a very near future, takes players down the path of mystery filled with mystical Chinese symbols and supernatural creatures.

The latest release by Habanero features some really impressive graphics. Lower paying symbols have been stylized to resemble the Chinese letters. Higher value symbols are various motives from the Chinese tradition and mythology. This gives Fenghuang a special oriental flavor, serving players with a completely new experience.

The playing atmosphere is rounded with the traditional music and sounds playing in the background as reels of Fenghuang spin their way to big wins. The calming music and pastel colors of this game will create an air of peace as you play and wait to trigger the bonus feature.

Fenghuang slot features 20 paylines across five reels, but this doesn't mean the game lacks a potential to pay really big. The new slot by Habanero is all about the mythical creatures making an appearance on the reels. When they do, you can expect an avalanche of coins coming your way.

The game's main feature is triggered when the bird and the dragon symbol collide on adjacent reels. This will initiate free spins mode which begins with a big 2x3 block of wild symbols on the reels. New creatures landing during the free spins will add even more wilds, creating huge winning opportunities. The bonus round continues until all magic birds and dragons have left the reels.

Fenghuang is the latest in the series of new, exciting slots developed by Habanero. Coming on the heels of titles like Gangsters and Sparta, this game will stun players with its amazing graphics and animations, and excite you with a lot of opportunities to win big.