Experience Power of Illusion with New Presto! Slot by Habanero 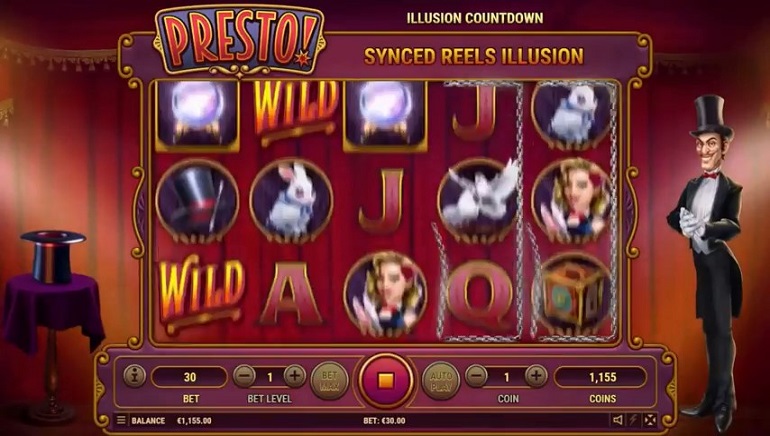 Habanero has come up with another exciting game for the players to look forward to. This time around, the company takes players on a mystical journey filled with magic tricks and illusions in their latest 243-ways Presto! Slot, available at Habanero online casinos now.

Magic Show on the Reels

Set on a backdrop of a performance stage, the Presto! slot sets up just the right atmosphere, with the magician standing to the right of the reels, occasionally clapping his hands or tucking the dove back inside his pocket, which adds a funny note to the whole experience.

Apart from the really nice and enjoyable graphics, Presto! also comes equipped with plenty of entertaining base-game features as well as the free spins bonus. In total, there are five different features, all of them triggered randomly after a series of winning spins. Features are aptly named illusions and the Illusion Countdown at the top of the reels will let you know how close you are to triggering the next random feature.

If you string together seven successful wins, the magician will come to life and pull out one of his tricks, such as flying cards, replicating magic hats, synced reels, and more.

Three or more crystal ball symbols appearing anywhere on the reels will trigger the main bonus feature in the Presto! slot, awarding 12 free spins. During the bonus feature, the Illusion Countdown will reduce by one on each spin even if there are no wins, which improves chances of landing more winning combos.

Habanero's new slot comes on the heels of their recent release, London Hunter, and it's a good indication that the company might have some big plans for 2018 in terms of new releases.