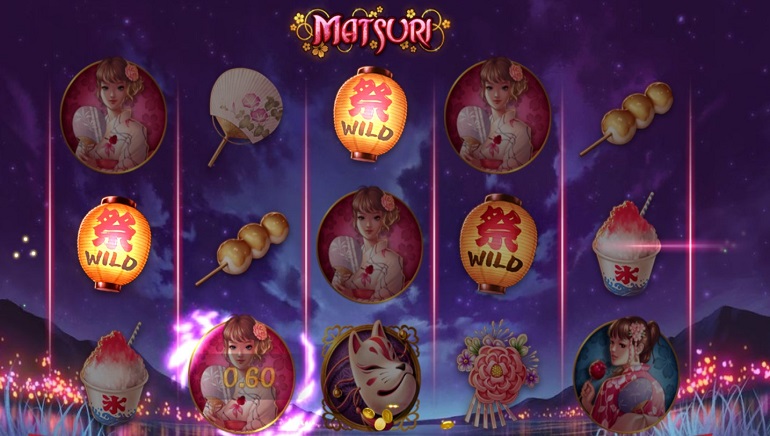 Following on the success of their Prissy Princess in February, Play'n GO is about to release another exciting game. Their newest slot is called Matsuri, and it takes players into the magic world of the Japanese festival, featuring splendid graphics, soothing traditional music, and highly entertaining gameplay.

The graphics in Matsuri are in line what we've gotten used to with Play'n GO slots. The game is set on the backdrop of Japanese coast at night, with fireworks and shooting stars lighting the sky. Sharp and vivid colors used by the developers add to the festive mood.

Symbols you'll encounter in-game include beautiful Japanese women in traditional outfits, ready for the festival, as well as various decorations and traditional treats like dango dumplings, cool kakigori, and more.

The traditional music constantly playing in the background, intensifying every time you win, increases the excitement and really drags you into the story. After a few spins, you'll feel like you are right there, at the heart of the festival.

The Matsuri slot features 25 paylines across five reels. Symbols to keep your out for are ornate paper lamps (Wilds), and two types of scatters, festival masks and goldfish. Wilds substitute all symbols except for scatters, and scatters can trigger two types of bonus games.

Landing three festival masks on reels 1, 3, and 5 will initiate the round of 8 free spins. During the round, any scatter landing anywhere on the reels will add two extra spins. Wild symbols will expand to cover entire reels, and these wild-filled reels will stay remain on the board for the next spin, moving one reel to the left, until they eventually leave the board. With some luck, you can end up with all five reels covered in Wilds.

Three goldfish symbols on three middle reels will initiate Kingyo Sukui bonus. During the bonus, you'll need to catch goldfish using a fragile paper spoon, and every time you catch one, you'll win prizes. The game continues until you've caught all the fish all the spoon breaks.

Overall, Matsuri is an exciting and entertaining slot guaranteed to provide you with a lot of hours of great fun. Expect to find Matsuri at Play'n GO-powered casinos like Casino Cruise, VegasCasino and BETJOY Casino when it releases next week, Thursday 23 March.