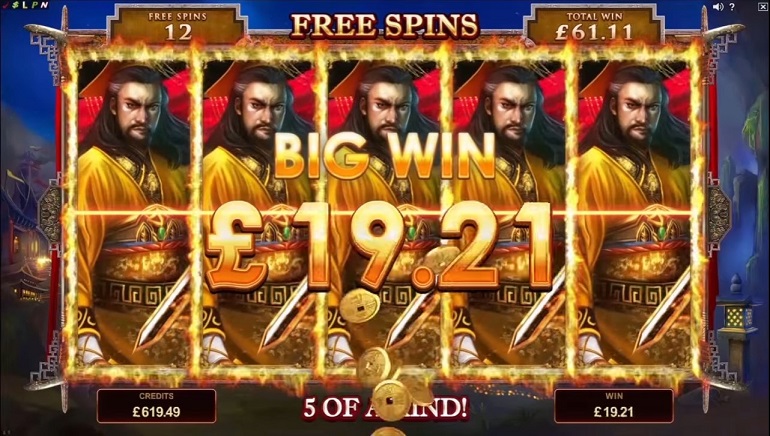 Huangdi The Yellow Emperor brings a unique theme from the ancient Chinese tradition and exciting gameplay with a lot of interesting features.

Huangdi The Yellow Emperor is one of the latest slots to be released by Microgaming. We are used to visually appealing and exciting slots coming out of this developer's workshop, and Huangdi doesn't disappoint. From an interesting theme to thrilling features, this slot grabs your attention from the very first spin.

As soon as you start playing Huangdi The Yellow Emperor, you'll be surprised by the game setting. The game takes you back to the period of ancient China and legendary Chinese hero Huangdi. The Battle of Zhuolu, which is the focus of this game, is one of the most important and epic battles of the ancient period, and it is a subject of many legends.

The symbols featured in Huangdi The Yellow Emperor correspond with the theme. Huangdi is the main symbol, stacked on all five reels, and there is also his legendary sword, a traditional instrument, a scattered Dragon symbol, and more. Even regular symbols (A, K, J, 10) have been stylized to fit with the main game theme.

Traditional Chinese music playing in the background adds to the overall feel of the game and makes your time even more enjoyable.

Huangdi The Yellow Emperor is a 25-payline slot, which can be played anywhere from $0.50 to $50 per spin, making it a good choice for players of all shapes and sizes. The slot features stacked symbols, giving the opportunity for big wins with every spin. If a full stack of symbols appears on reel one, it will also expand matching symbols on all other reels for the maximum payout.

The scattered Dragon symbol is what you'll want to see as much as possible when playing Huangdi. Three or more of these anywhere on the reels will trigger 15 free spins, which can be re-triggered. During the free spins, the Dragon Wild (Huangdi logo) is stacked on the reel one, creating even more winning chances. In addition, a stack of Wilds on the first reel will expand any Wild appearing on the fifth reel. During free spins, any full stack appearing on the first reel won't just expand matching symbols, but all Wilds as well.

Overall, Huangdi The Yellow Emperor is a slot with a truly intriguing theme, immersive sound background, and thrilling gameplay with a lot of winning opportunities. This is one of those slots you should definitely take for a test ride.