Experience the Thrill of Domnitor's Treasure by BGaming 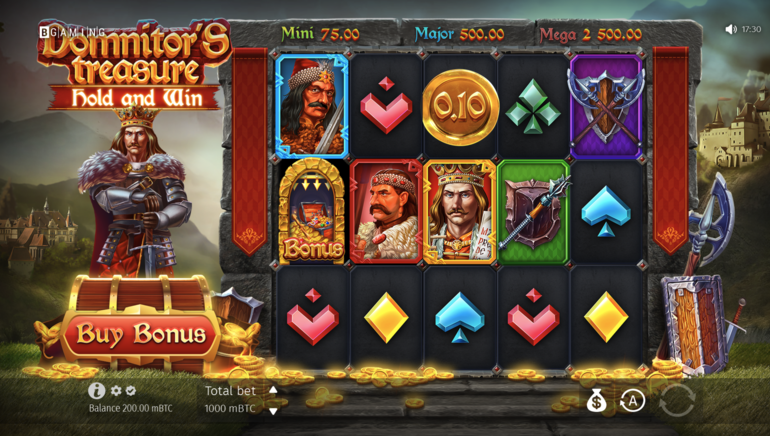 The sequel to Domnitors has arrived. This pulse-pounding video slot game by BGaming is blazing a trail with wild adventures through medieval times. This thrilling slot game takes players on a thrill ride through the Middle Ages with a mix of regal symbols in the Grand Domnitor realm.

Behold the Realm of the Grand Domnitor

Step into the world of the Grand Domnitor and battle for amazing rewards with Dominator's Treasure, the newest release from BGaming. With shields bearing Scatter and Coin symbols as your protection, you'll have all you need to emerge victorious.

During the main game, three Scatter symbols on reels 1, 3, and 5 will trigger 5 Free Spins. And in the Free Spins round, the Blazing reels feature combines reels 2, 3, and 4 into a giant 3x3 symbol that pays out as if nine matching symbols appeared.

Plus, the appearance of a Giant Scatter symbol during Free Spins will award an additional three spins – with no limit on the number of re-triggers.

Major Jackpots Up for Grabs in the Grand Domnitor Bonus Game

But that's not all – you'll also have the chance to win one of three Jackpots in the Bonus game. Land six or more Coin symbols on the reels to trigger the Bonus round, where you'll be awarded six re-spins.

If a Plus spin symbol appears, you'll receive an additional spin. And if you're lucky enough to collect 15 Coin symbols on the reels, you'll win the Jackpot (worth x5000 of your bet).

But if you can't wait for a Bonus round to trigger, you can always use the Buy Bonus feature to purchase a Free Spin game or Coin Game. Then, change your bet, and the Buy Bonus price will adjust accordingly – the next spin will trigger the desired Bonus game.

With 25 paylines, medium-high volatility, and a maximum win of x1532, Dominator's Treasure is sure to provide endless entertainment. So, prepare to join the battle and fight for the Grand Domnitor's treasure today.

Grand Domnitor video slot features 25 lines of wild entertainment with a Buy Bonus round, Free Spins, Coin Respins, Buy Bonus, and Chance X2.5. The game has a return to player (RTP) percentage of 94.92%. This means that players can expect to win back $94.92 off every $100 in the long term. The maximum win is X1532. This medium-high volatility game offers the potential for big wins infrequently.

Wild Symbol – The Wild substitutes for other symbols except for Coin and Scatter.

Free Spins Rounds – Once 3X Scatters appear on reels 1, 3, & 5, then 5X Free Spins are triggered, It's possible to trigger a Giant Scatter Symbol while the Free Spins are active, and this awards players 3X Free Spins with unlimited re-triggers.

Blazing Reels – While Free Spins are active, reels 2, 3, & 4 can combine to form a Giant Symbol featuring a 3X3 grid. This pays when 9X identical symbols form on the reels.

Hold & Win – During the Bonus game, players have the chance to increase their winnings through the use of Coin symbols. The more Coin symbols that appear on the reels during the Bonus round, the greater the potential payout. Coin values can range from x1 to x20 of the bet, and if 15 Coin symbols are collected, the player will win the Jackpot worth x5000 of the bet.

Jackpot - During the Bonus game, players can win one of three Jackpots – the Mini, Major, or Mega. Players must land the corresponding Coin symbols on the reels to win the Mini and Major Jackpots. All 15 cells must be filled with Coin symbols to hit the Mega Jackpot.

Buy Bonus - The Buy Bonus feature allows players to purchase a Free Spin game or a Coin Game at their discretion. The price of the Buy Bonus will adjust based on the player's bet, and the desired Bonus game will be triggered on the next spin after the purchase.

BGaming encourages all players to practice responsible gaming conduct as a responsible gaming provider. This includes setting up a budget, sticking to it, and never chasing losses. In addition, it's important to remember always to play responsibly and within your means. BGaming is committed to providing all players with a fun and safe gaming experience.