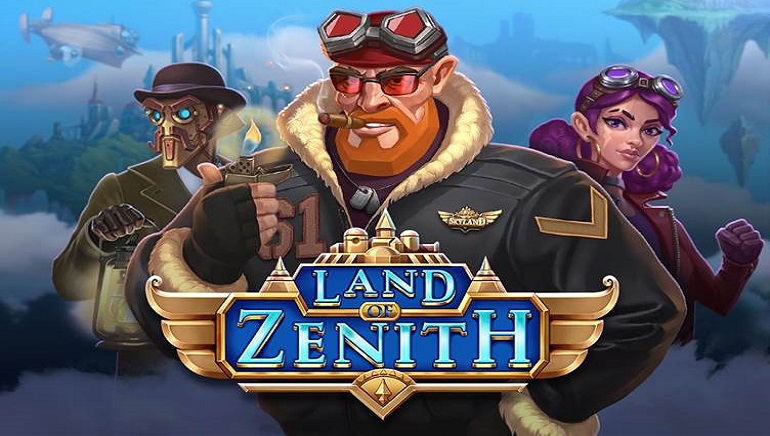 Land of Zenith is a new slot from Push Gaming that's set in a Steampunk world. It comes with a thrilling Hypermode free spins feature.

Players can visit a world of Victorian-style sci-fi with the new Land of Zenith slot from Push Gaming. It's a 6-reel, 30-line desktop and mobile game with an exciting Hypermode free spins feature.

The setting is the bridge of an airship, floating above a futuristic city in the clouds. Planet and star-shaped jewels appear on the reels, along with a crew of Steampunk-style characters. A bronze-effect mechanism to the side of the reels unlocks bonus features when special Turner symbols line up the different parts of the machine.

If 3 sections of the machine align in the right way, they release a glowing orb in the middle of the reels. In a Bouncing Mystery feature, the orb moves around the reels, and can leave multiple mystery symbol positions behind. These all transform into the same random symbol at the end.

A thrilling free spins feature begins if the machine turns gold and the sections line up at the same time. Players enter a Hypermode free spins round, where the reels spin for 20 seconds. Each time a wild symbol appears, it speeds up the spins and adds to a meter. If the meter fills, it adds extra seconds to the total. Filling the meter also removes a low-paying symbols, and once this happens 4 times, only the highest value emblems will remain.

James Marshall, CEO, at Push Gaming said: “I’m proud to see that the talented team here has done it again with Land of Zenith. It’s a beautifully designed adventure in the clouds taking cues from classic fantasy literature and adding some of our own gaming magic to create a truly modern and engaging slots experience.

“Once players get their hands on it, I’m sure that they’ll have as much fun playing it as we did developing it. It’s yet another hugely entertaining title to add to our content portfolio.”