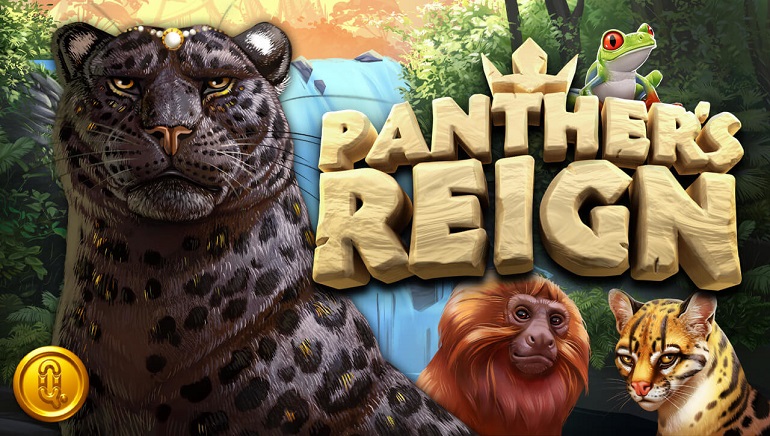 Players can get their claws into a stunning new slot from Quickspin. Panther's Reign features wildlife symbols across 5 reels and 50 paylines.

Magnificent cats prowl the reels of the new Panther's Reign online slot from Quickspin. The jungles of South America are alive with monkeys. macaws and colorful frogs. Panthers can add wilds to the reels, and it comes with a rewarding free spins bonus round with sticky symbols.

50 paylines cross the 5 reels of the Panther's Reign slot. The reels sit amongst lush tropical foliage and a waterfall rages behind the scenes. Playing card suit symbols pay smaller prizes, but it's the wildlife of the Amazon that make this game come to life. Highly detailed animal symbols, including the majestic black panther, return the top wins, with a maximum prize value of 5,202x the line bet up for grabs.

The soundtrack of birds, big cats and insects help to bring the jungle to PCs and mobiles.

A wild symbol acts as others to complete winning lines, and in the randomly awarded Wild Spray feature, up to 10 wilds can be placed on the reels at once.

The bonus scatter symbol is a green jewel in a silver surround. It triggers 5 free spins when landing in 3 places, with any scatters over this number adding 1 extra spin to the total. If enough appear at once, players claim 22 free spins. During the round, any win activates a respin of the reels. The winning symbols lock in place and if more of the same type appear, these also stick on the reels for further respins.

The total win for the feature is paid out when the free spins end and no more respins occur.

High Volatility in the Jungle

Panther's Reign is a high variance slot, where paybacks average 96.25%. Staking options vary from just 0.10 per spin, right up to a maximum of 100.00. It's compatible with desktop and mobile platforms, and available now.