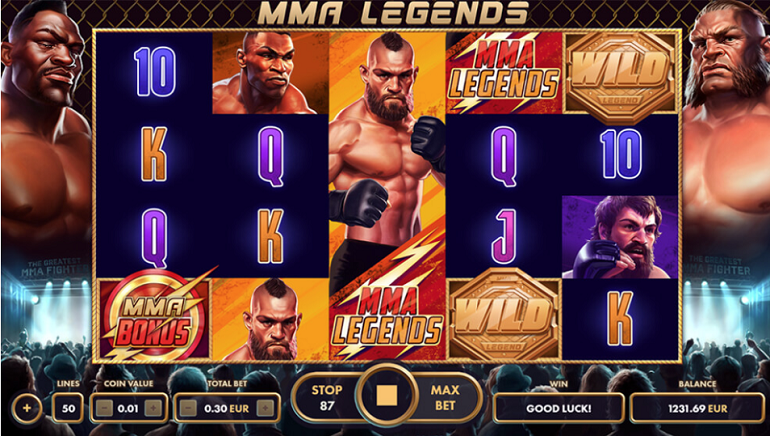 MMA Legends is a new slot from NetGame Entertainment that features several fighters across 5 reels and 50 paylines.

The latest online and mobile slot from NetGame Entertainment is MMA Legends. It's based around Mixed Martial Arts and sees a number of fighters on the 5 reels. This medium to high volatility game has 50 paylines and a range of hard-hitting bonus features.

The reels sit within an arena filled with an excitable crowd. Playing card symbols pay smaller prizes, with the 5 fighters worth more. A golden wild symbol stands in for others when it can complete combinations, and the MMA Bonus symbol triggers a series of 10 free games.

MMA Legends comes with a Bet Slip Totalizer option. Players can wager that a particular fighter symbol will appear at least a certain number of times within a set number of spins. Totalizer bet options range from 100 to 1000 credits, and players can predict the appearance of a fighter in between 10 and 50 consecutive spins. If the target is reached, they win a bet multiplier.

Players can enjoy all the action of the MMA Legends online slot on PCs, smartphones, and tablets. Stakes can be set from just 0.30 per spin to 30.00, and the average RTP is 96.03%.

After a number of years gaining experience in the land-based casino industry, NetGame Entertainment entered the online business in 2012. They currently have around 30 mobile-optimised games in their range and plan to add another 20 before the end of the year. Their biggest hits include African King, Clover Stones, Hit in Vegas, and Dancing Lanterns.