Fantasy-Themed Fun with Meow in the Boots Slot by Gaming1 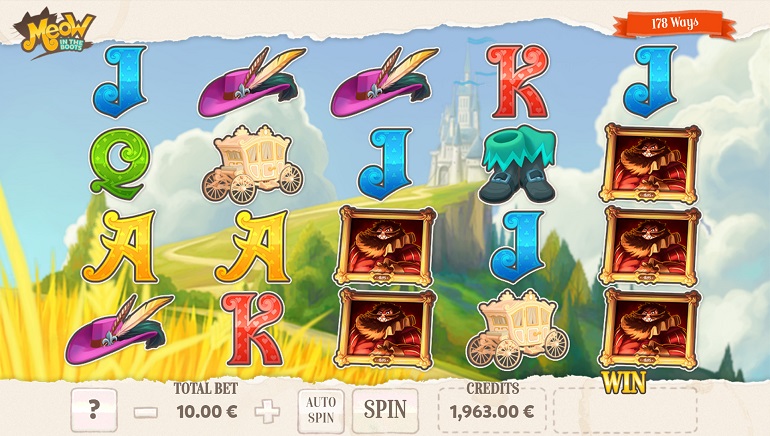 Gaming1 has just launched some feline-themed fun with Meow in the Boots slot game. Set in the Meadows, on the foothills of the Royal Palace, this brand-new slot brings fairy tale adventures to players everywhere.

Meow in the Boots is a 178 ways to win slot machine game on a 5 x 4 reel grid format. Set in the golden wheat fields of the Royal Palace, this adventure-laden slot is bubbling over with fun. Released by Gaming1, Meow in the Boots features a series of connected symbols that pay, in both ways. Players can receive a pile of up to 4 Wild Meow in each Free Game, with up to 50 Free Spins up for grabs.

Meow in the Boots brings a majestic world to life with amazing winning possibilities for players. The royal court has entrusted the fate of the kingdom to Meow in the Boots, a bold and fearless kitty adventurer, much like Puss in Boots. The destination is none other than the evil ogre's castle where dungeons filled with 24-karat gold await lucky players.

Meow in the Boots High and Low Paying Symbols

High-paying symbols in the game include the Princess, Carrabas, Meow Wilds which replace other symbols except for the Princess bonus symbol to form winning combinations, the ogre, the carriage, the hat, and the turquoise boots. The game's low-paying symbols include: Jack, Queen, King, and Ace. Symbols pay in both directions, from left to right, or right to left. When players form winning combinations, the number of reels determine the value of the wins.

3+ princess bonus symbols initiate the Free Spins round. While this is in play, the Wild symbols are stacked and may land up to X4 symbols high. The more Wilds you land, the bigger your payouts. Players can toggle their bet size to preferences. With auto spin functionality enabled, players can also set loss limits, single win limits, or initiate turbo mode.