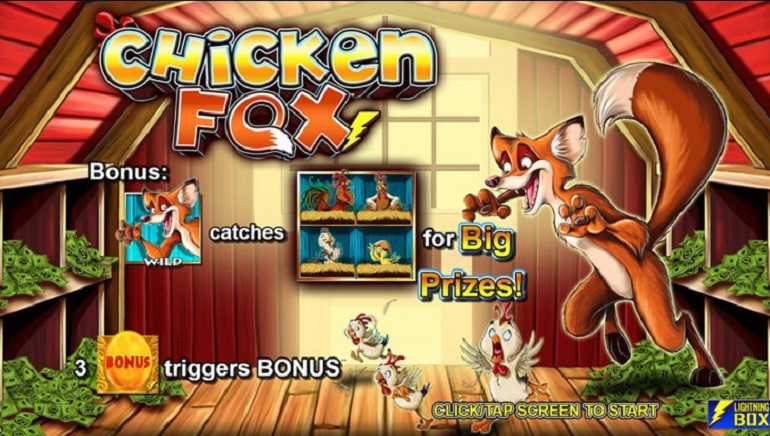 Chicken Fox is a new slot from Lightning Box Games that following a period of exclusivity with Unibet, was made available across their network from 20th February.

Chicken Fox is a new slot from Lightning Box Games that released this week, after a period of exclusivity at Unibet Casino.

This 5-reel, 25-line game is set in a barn and features wild foxes, free games and a catch the chicken feature that can pluck out some extra winnings for players.

Chicken Fox can be played for stakes of between 0.30 and 450.00 per spin. It comes from the Australian developer Lightning Box Games and features some classic Aussie humour, with cartoon animals chasing each other around the reels.

Four chickens, a pig and a tractor are in the barn, but players should look out for the farmer's wife as she's a high-paying wild symbol. Playing card symbols are also seen, with each overlaid by corn, tomatoes and other farm-related items.

Don't Get Outfoxed In The Free Games Feature

Players can feather their nest during a valuable free spins round. Up to 30 bonus games can be triggered by a golden egg, and during these, the fox is an extra wild symbol. He can also be doubled up on a symbol to multiply any lines he completes by 2x.

Throughout the free games, chickens are collected by the fox and payouts are based on how many he catches before the feature ends.

Chicken Fox is a mobile compatible slot machine, so there's no need to be cooped up if players want to spin the reels away from home.

Peter Causley, CEO and co-founder of Lightning Box, said: “We’re thrilled to release our latest title, Chicken Fox, which should cause a bit of a flap. Its comically dark theme will have players chasing chickens up and down the reels.

It’s fun features and easy gameplay are what they have come to expect from Lightning Box, and we’re eager to hear their feedback from our latest creation.”