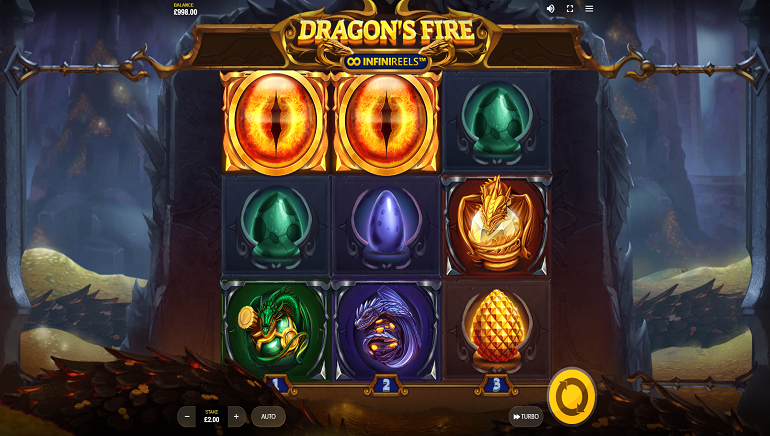 The Dragon's Fire: InfiniReels slot swoops into online casinos where players can enjoy the chance to extend the number of reels and build huge win multipliers.

The Dragon's Fire: InfiniReels online slot roars into casinos featuring the Red Tiger range. What starts out as a 3-reel slot with 27 ways to win can quickly grow into a game with many reels and a vast number of winning ways. Multipliers can grow in value alongside the extending reels, and players can unleash the dragons from 25th February, 2021.

Turn Up The Heat

By using the exciting InfiniReels system developed by NetEnt, Dragon's Fire: InfiniReels presents players with a 3x3 grid of symbols, with 1 extra reel added on when a winning combination is formed. If the new reel extends the win, a further reel appear on the right, and this continues for as long as the winning symbol continues to land.

Dragon egg symbols will increase a win multiplier by 1x on each appearance, helping players to grab some big wins at the end of a sequence.

Like other slots from Red Tiger, Dragon's Fire: InfiniReels features excellent graphics. Coiled dragons share the reels with decorative eggs, and the iconic dragon eye symbol. As well as the InfiniReels mechanism, players can benefit from free spins, triggered by the appearance of 3 scatter symbols. Only a selected symbol appears in this round, along with further scatters that can extend the feature. Instead of resetting back to 3 reels at the end of a series of wins, the grid continues to grow throughout the free games.

“We are looking forward to players sampling the thrill of InfiniReels™ in this new adaptation perfectly crafted to fit the Dragon’s Fire series gameplay features that slots players already know and love.”