Fight The Alien Plants In Betsoft's New Back To Venus Slot 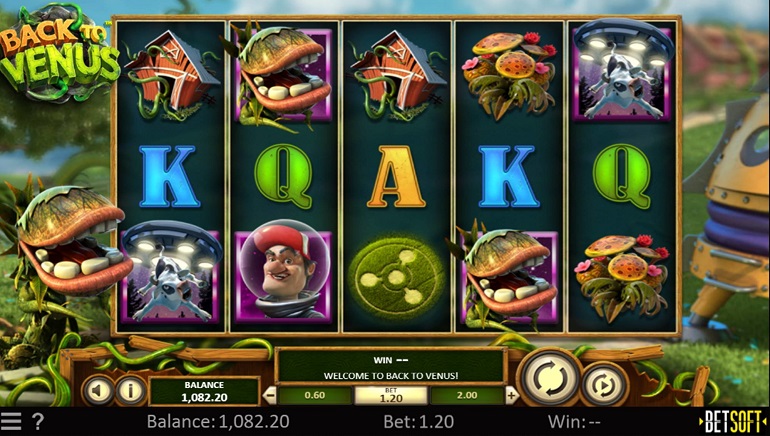 Back to Venus is a new slot from Betsoft that sees alien plants attacking a farm. Help to save the day by landing free spins with wild multipliers.

The latest slot from Betsoft takes players to a remote farm, which is under attack from alien plants. Back to Venus is a 5-reel, 20-line slot that uses the high-end graphics that help to make Betsoft games stand out.

Features include reel respins that run until players land a win, wild symbols, and a free spins round set on Venus, where extra wilds and win multipliers await.

Launching Across Desktop And Mobile Platforms

Back to Venus uses playing card icons to return smaller wins, plus crop circles, a barn, alien plants, and a cow being abducted to return higher prizes. A brave astronaut pays the top prizes, followed by a venus fly trap that's taking over the farmyard. This predatory plant and its spaceship also form a backdrop to the reels.

After a non-winning spin, a symbol can randomly stick to the reels, as the rest respin until the chosen symbol creates a win.

An asteroid wrapped in vines is the wild symbol of the Back to Venus online slot. When it crashes onto a reel, the wild sticks in place for the next 2 spins. The Flowering Wild Boost feature can trigger on any non-winning spin, and players will see multiple asteroids hit the reels during a free respin.

The retro-style rocket is a bonus symbol that launches free spins. If 3 appear at once, players are first transported to Venus. Once there, they discover that wild symbols appear more often during 10 extra games, and stick to the reels for the duration. If the bonus games are triggered by 4 rockets, the 10 free games feature sticky wilds, plus multiplier wilds that give wins a big boost.

Get Set For Blast Off