Fight With The '300' In Almighty Spatra Slot From Endorphina 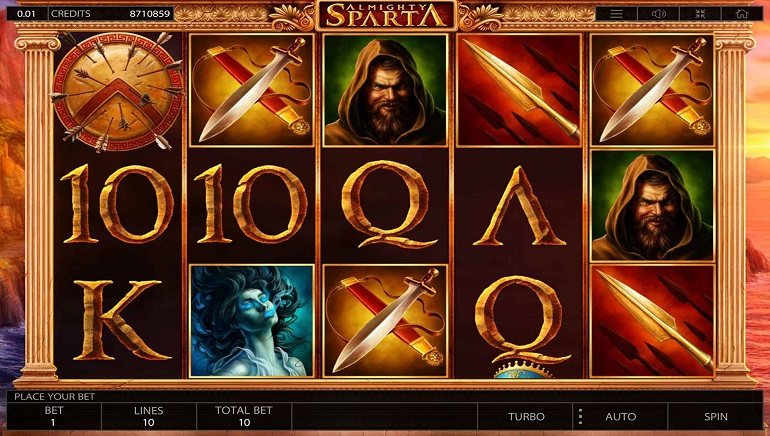 Almighty Sparta is a new slot from Endorphina that takes players back in time to ancient Greece, where King Leonidas fought with his 300 warriors in a famous battle.

The latest slot from Endorphina Gaming is set at the Battle of Thermopylae, where 300 Spartans held off the huge armies of Persia. Almighty Sparta is a 5-reel slot with 10 paylines that brings this famous conflict to life in stunning detail. Features such as wild substitutions and free spins with multipliers reward those who choose to fight alongside the Spartans.

The impressive design features of Almighty Sparta include classic Greek columns that frame the reels, while the cliffs of Thermopylae can be glimpsed in the background.

Almighty Sparta uses playing card symbols to create the lower-value combinations, with bigger wins collected when the character symbols cross 3 or more reels from the left side. Swords and spears are also seen, with all symbols presented in great detail.

King Xerxes, leader of the Persian armies will appear, along with the Oracle of Delphi. King Leonidas is a wild symbol, able to replace others, apart from the scatter symbol, if needed. All character symbols can be stacked on the reels, which can make it easier for players to pick up high-paying combinations.

A Spartan shield is the scatter symbol which triggers a free spins bonus when it lands in any 3 or more places. All winnings during the feature will be quadrupled in value. An initial 20 free games will play out and the round can be retriggered if 3 shields appear in a single spin.

Wins can be gambled in a risk game, which can multiply their value over and over, but players could lose them if a wrong pick is made during the feature.

Almighty Sparta is now available at online casinos, where players can access this famous battle on desktop PCs and mobile devices from 0.20 per spin.

The game is fully licensed and certified for fair play, with a high return to players percentage guaranteed.