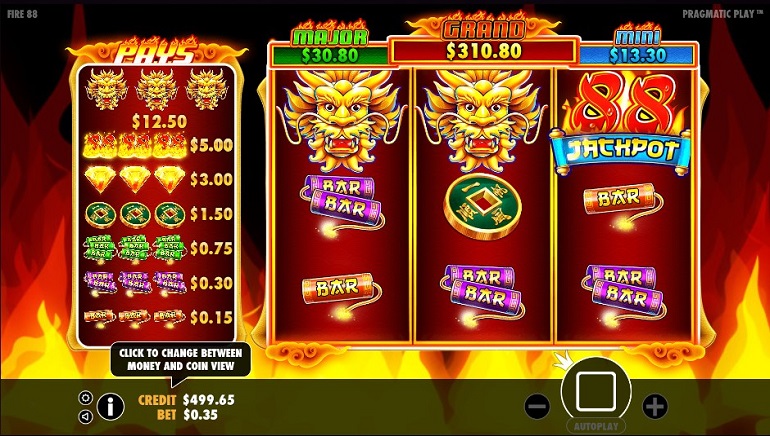 You expect to see the newly launched Fire 88 slot when you next visit a Pragmatic Play casino.

Pragmatic Play has been known for producing a number of cutting-edge slot games, including Diamond Strike and 7 Piggies, but the software provider is now taking a step back by adopting more of a retro approach to design in the new Fire 88 slot.

The retro style stems from Pragmatic Play’s use of a three-reel slot with three rows. Many software providers are only concerned with five-reel slots, but Pragmatic Play seems to be trying to break the mould by looking to classic slot machines for inspiration.

The classics are revisited in the use of bar symbols, but these are designed in keeping with the oriental theme of the overall slot. For those in the know, it will become obvious that the number in the Fire 88 name was chosen for its connotations with good fortune in the Chinese culture.

Pragmatic Play has made the three-reel slot with seven fixed paylines, giving the players to stake up to seven coins on each spin that they make. The minimum value starts from €0.07 per spin and can build up all the way to €3.50 at the very top end of the wagering structure.

A golden Chinese dragon has been utilised as the wild symbols can substitute for any others that are missing. Beyond the wild symbols, another main feature would be the jackpot bonus game that can be launched with three 88 symbols. In the bonus game, there will be the chance to win the mini, major, or grand jackpot tier, which offers an 88x multiplier.