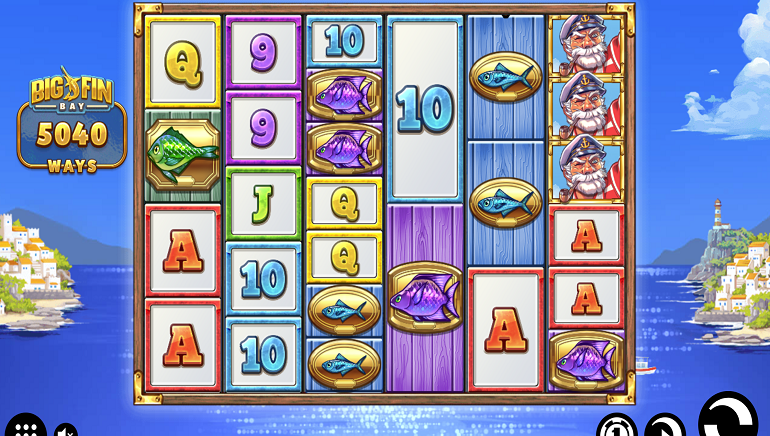 Big Fin Bay is a fishing-themed slot that's set to make a splash at online casinos from March 31st 2021. It's a high volatility game where wins can reach 15,040x.

Big Fin Bay is an upcoming online slot from Thunderkick themed around fishing. It's a 6-reel game where the number of symbols on each reel varies from spin to spin, although in the base games, there are always 5040 winning ways. During a free spins feature, players could get as many as 117,649 different ways when the maximum number of symbols appears on each reel.

Card symbols, fish, and a fisherman in a stripy top appear across the reels of the Big Fin Bay slot. In the base games, there are 5040 different ways to line up symbols for a win, helped by a golden marlin wild symbol that can act as others. Any wild involved in a win will expand to cover the whole reel, and in a random Mystery Wild feature, up to 3 reels can fill with golden marlins at once.

The anchor scatter symbol in 3 or more places launches a free games feature. The number of spins is determined at random, with each reel holding a scatter symbol awarding a maximum of 6 games. Throughout this feature, wild symbols expand and trigger respins of the remaining reels. They also increase the number of winning ways by adding extra symbols to reels and the number of symbol positions remains for the rest or the round..

It's possible for wilds to create reels with 7 symbols on them, for a grand total of 117,649 winning ways if 7 symbols appear on each of the 6 reels.

A generous bet range of 0.10 to 100.00 per spin covers most bankrolls. Players can catch winning combinations from the desktop and mobile compatible Big Fin Bay slot from 31st March 2021.